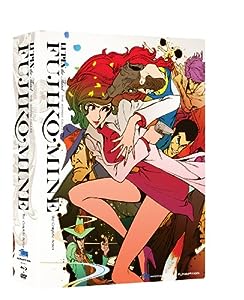 We’ve got a doozy of a New Release Tuesday for you. A plethora of kick-ass sexy ladies, and a bit of magic and action thrown in for good measure. First up, fans can finally purchase Lupin the Third: The Woman Called Fujiko Mine on BD/DVD Combo! The ultimate femme fatale, the series is absolutely stunning to watch. A must have for fans of the Lupin franchise.

synopsis:
She’s a thief. A killer. A saint and a scandal. She’s whatever you need her to be to get the job done. After sizing you up with one sinful glance, she disarms you with a touch. You’re powerless to resist. She’s walking seduction, with an insatiable itch for the priceless and a fetish for mischief. She takes your breath away to get what she wants. She takes everything else just because she can. It’s all in a night’s work for the woman called Fujiko Mine. She’s the slinky, sultry thread that holds Lupin III’s crew together – and this is the heist that started it all.

Speaking of kick-ass ladies, the major is back, except this is before she became the major. Ghost in the Shell: Arise is available today in a special Collector’s Edition box. This is something new for us here at FUNimation. This release contains an imported English-subtitled blu-ray disc, an imported O-card, and an imported film strip. It also comes with an English translated art-book (all seen in the above photo). Of course, our normal FUNimation dubbed released will be available later, but if you want this one of a kind Collector’s Edition you’ll have to act fast. We’ve got a VERY limited number of these for sale.

synopsis:
In the year 2027, a year following the end of the non-nuclear World War IV, a bomb has gone off in Newport City, killing a major arms dealer who may have ties with the mysterious 501 Organization. Public Security official Daisuke Aramaki hires full-body cyber prosthesis user and hacker extraordinaire, Motoko Kusanagi, to investigate. On the case with her are “Sleepless Eye” Batou, who believes Kusanagi is a criminal, Niihama Prefecture Detective Togusa who is investigating a series of prostitute murders he believes are related to the incident, and Lieutenant Colonel Kurtz of the 501 Organization who also wishes to keep an eye on Kusanagi.

And we’ve got even MORE kick-ass sexy ladies for you. High School DxD is now available on BD/DVD Combo. Join Issei on his quest to become the #HaremKing and get an eyeful of these super sexy devils.

synopsis:
A war between heaven and hell is raging on Earth – and a hot mess of hormonal fury is raging in Issei’s pants. The guy is dying to get some action. Which is funny, since his first date ever turns into a winged monster and tries to kill him. Fortunately, ridiculously curvy redhead Rias comes to his rescue. She’s president of The Occult Research Club, a club that doesn’t actually research the occult. They ARE the occult – and Rias is a Devil. Rias takes Issei as a more-than-willing slave and begins training him to use magic in battle against the Fallen Angels, the long-time enemies of Devils everywhere. If Issei can improve his mystical skills, he’ll be able to help his hotter-than-hell master and her scorching supernatural schoolgirl friends defeat their foes. Even better, he might end up with a few sexy slaves of his own.

So, which of these titles are you most interested in getting?