Some Very Important Information about our OniAi Release 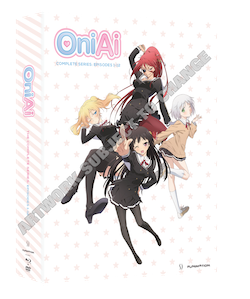 Retailers have begun listing our December titles, and you may have noticed something that is a bit out of the ordinary for FUNimation. OniAi: The Complete Series will be available on BD/DVD Combo on December 31st, and it will be our first ever subtitle-only anime Blu-ray and DVD release.

Now, we’ve seen some comments on the Twitterverse and on Facebook, and we want to take the time to address a few of your concerns:

“Why are you releasing this title as subtitle-only?”
We are trying out a sub-only release because it will inform us as to whether it is a viable option for titles in the future that would otherwise not get released at all. In other words, we’re looking into ADDING more releases, which is a good thing!

“Does this mean that you’re going to stop doing dubs?!”
No, we are NOT switching to a sub-only business model. Don’t worry, you’ll still get English dubs on the majority of our titles.

“Will my favorite show be released as subtitle-only? How do I make sure that it gets an English dub?”
The best way to ensure that your show gets an English dub is to support legal simulcasts and streams. We use streaming performance as one of several indicators to determine sales potential for a title. So, be sure to watch on official anime sites like FUNimation.com and Hulu.

In addition, we want to make sure that our sub-only titles are treated right; so we have lowered the SRP, but included both DVD and Blu-ray in the release. They’ll also be housed in a sturdy chipboard box.

Now, here’s a little more information about OniAi! The Complete Series contains all 12 episodes, plus the 6 bonus OVAs. It will also come with reversible wraps so you can put your favorite girl on the cover! Please click this link to pre-order your copy today!

Feast your eyes on host of desirable darlings in this sassy comedic romp from the dirty little minds that brought you Baka and Test and Hayate the Combat Butler!

When adorable teenager, Akiko, is reunited with her big brother, Akito, she’s determined to take her sisterly affection to the next level! But her BroCon fantasies are dealt a cruel blow by the arrival of three colorful rivals. There’s a blonde heiress with a fetish for plushies, a boyish beauty who yearns to serve, and a ravishing redhead who’ll stop at nothing to get her man! Every coy ploy Akiko dreams up is deviously derailed by robes that just happen to fall open, the flashing of come hither eyes, or scandalous splashing in the community bath! While Akiko has her hands full staying a step ahead of the competition, poor conflicted Akito can’t help but think: my little sister can’t be this…crazy!?

So, what do you think? Are subtitle-only releases something you’d like to see more of in the future?