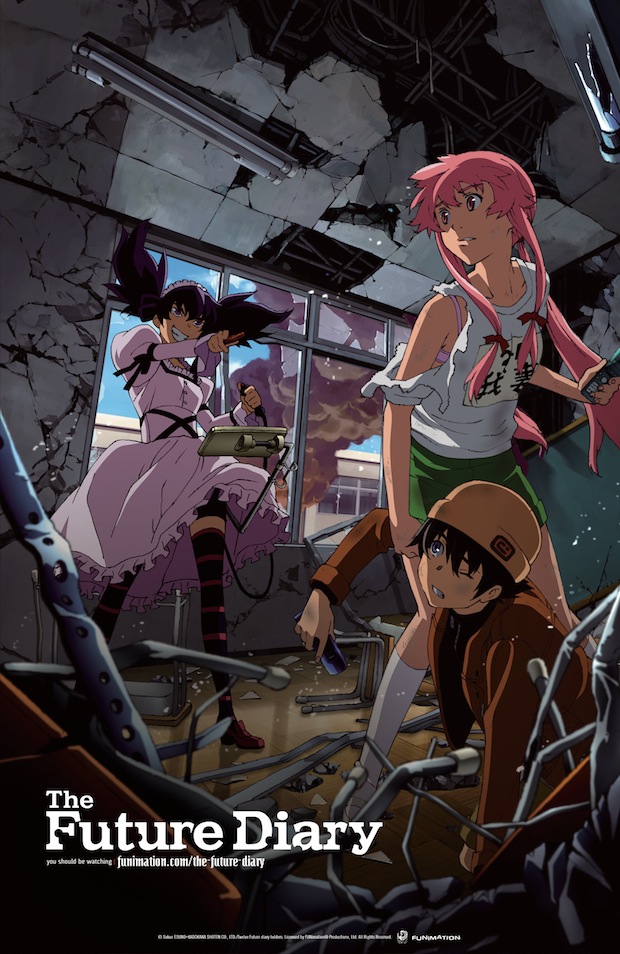 Thank Deus it’s Friday! This has been a banner year for horror in anime, so we decided to get an early start giving the terror lovers, costume fanatics, and party animals among you a whole heck of a lot to watch! Every Friday until Halloween we’re going to deliver up a series, or movie, to enjoy during the weekend as we start ramping up to fright night!

This week’s pick is less traditional horror and more of a supernatural free-for-all: The Future Diary, a tale of a deadly game where the winner becomes a god and the losers all die.

Summary: Reality quickly unravels for antisocial Yukiteru when Deus Ex Machina calls him into a death match to determine the new god of space and time. Each mentally scarred player possesses a prophetic device tuned to his or her personality disorder, giving them control over their future, and the fate of their opponents. It’s their strongest weapon—and their greatest weakness.

Within hours of abusing his digital diary’s predictions, Yukiteru is cornered by a crazed classmate. Yuno—who is obsessively stalking him with her own psychic cell phone—is cute, sharp, and great with an ax. Still, her psychosis hides a vile secret. As a serial killer, a cult priestess, and a volatile escape artist take a stab at eliminating the teens, Yuki can cheat death under Yuno’s maniacal protection or—-DEAD END.

Click here to buy your copy of The Future Diary! Parts One and Two now available on DVD.