Is This a Zombie? Of the Dead Contest – Deredere Mode Activate! 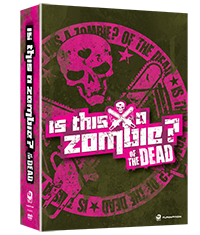 Happy Zombie Day! To celebrate the release of Is This a Zombie? OF THE DEAD, we’re holding a contest.

In the clip below, Ayumu visits a tsundere cafe, where all your food is free if, and only if, you can unlock the waitresses’ deredere mode. Ayumu’s able to get Haruna and Sera to turn from tsun to dere, and it’s particularly relevant to the show because most of the girls are high-tier tsundere who beat him up all the time.

For those of you who don’t know what “tsundere” means, here is a brief explanation from Wikipedia: “a person who is initially cold and even hostile towards another person before gradually showing his or her warm side over time. The word is derived from the terms tsun tsun (ツンツン), meaning to turn away in disgust, and dere dere (デレデレ) meaning to become ‘lovey dovey’.”

So, here’s your challenge: “If you walked into a tsundere cafe, what would be your strategy for breaking through your waitress’ icy cold exterior and to unlock the lovey dovey center?”

email your answer to contests@funimation.com with the subject line “Is This a Zombie? Of the Dead Contest” 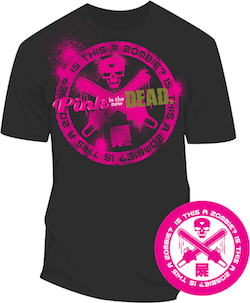 PRIZE:
One lucky winner will receive a limited edition Is This a Zombie? t-shirt and decal!

You have from now until Sept. 27th to enter! Click here for complete rules and details.

Don’t forget to pick up your copy of Is This a Zombie? OF THE DEAD on DVD today!

The world’s most eligible zombie is back for another round of cross dressing, decomposing, undead adventures in the only show where corpses get all the chicks! Season Two gets off to a shocking start as Ayumu breaks Haruna’s magic chainsaw and accidentally exposes his fondness for pretty pink dresses to the entire school! Next there’s an incident with a dreadful dance that turns out to be a curse – and an embarrassing trip to a maid café where all the zombie’s roommates work! But the shenanigans take a backseat to bigger problems when Ayumu’s mysterious drinking buddy turns out to be the most powerful magical girl of them all! To save his friends and defeat this adorable new menace, zombie boy must do the unthinkable: throw a mixer for his own murderer! With a little help from his loyal harem of vampires, magical girls, and the world’s cutest necromancer, Ayumu just might survive to rot another day!