#TBT – A Certain Scientific Analysis: The Science Behind Railgun

(You can also see more of our Analysis series with A Certain Scientific Analysis S, which covers Railgun S [season 2]. We’ll be putting part 3 of our series soon on this blog, so keep an eye out for it!)

The characters of “A Certain Scientific Railgun” wield amazing esper powers, but nearly none are more impressive than our protagonist, Mikoto Misaka, nicknamed “the Railgun.” Her electricity powers, based on the electromagnetic projective launcher of the same name, allow her to shoot small arcade coins at high speeds for maximum damage. In other words, she’s a badass.
But what is a railgun? We’ve asked Justin Lan, a mechanical engineer from MIT, to explain the concept—and how it relates to the show.

Warning: Those of you with an aversion to science and/or math may wish to turn back now, but it’d be nice if you stay. I’ll keep it simple, I promise!

The main character, Mikoto Misaka, has electromagnetic manipulation as a superpower. Her “signature” move is to take a coin, and to flick it forward while using her powers to accelerate it towards the target; as a result, she has earned the nickname “The Railgun.”

This is an actual railgun: 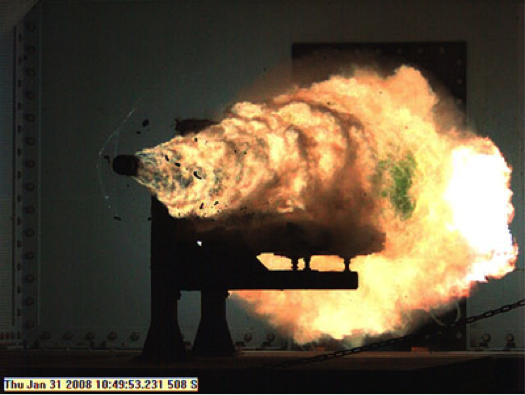 And here’s how it works: 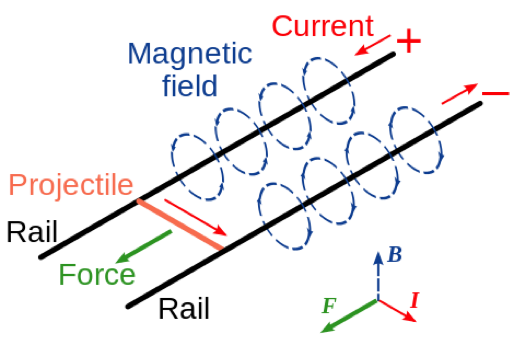 Essentially, when you run a current through a loop of wire, it produces a magnetic field (B) in the loop. This field interacts with the current going through the loop to produce a force that pushes outwards on the loop (relative to the center of the loop). It doesn’t matter which way the current is going.

If you run a lot of current through the loop, the loop rips apart due to the forces! Well, it would, except usually what happens is that all the current going through the wires instead causes the loop to catch fire and/or explode. That’s no good.

Let’s replace the loop with two long “rails” of metal parallel to each other bolted firmly to the ground, with a thing that can slide down the rails connecting them. When we turn the current on, each section of the loop tries to go outwards; the rails are bolted down, but the sliding thing travels down the rails just fine due to the forces. Hooray! If you make the rails really long, you can use this system to go places, but it’ll use a lot of power.

If you make the rails a bit too short, the sliding thing goes flying off the end. This is a railgun.

So how does this relate to Misaka’s powers? 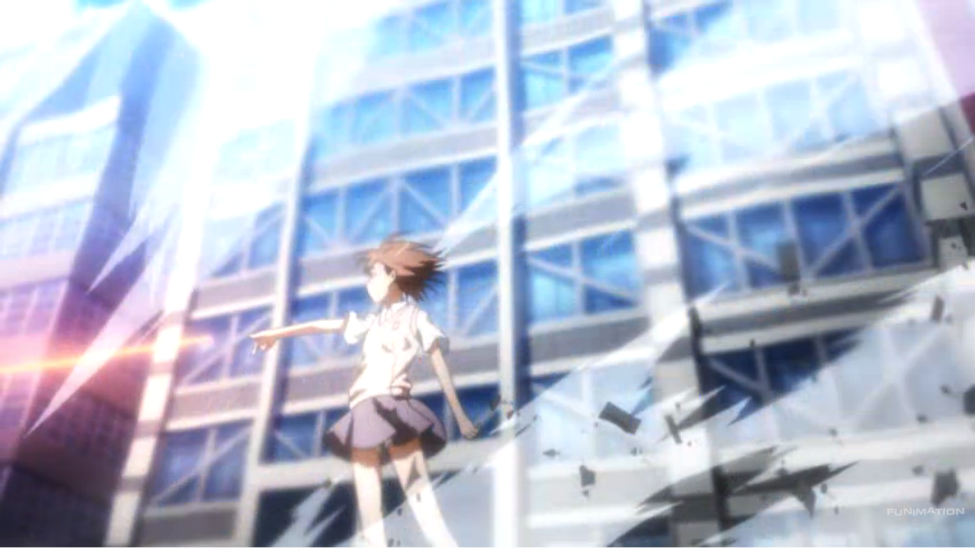 The first thing, of course, is that Misaka’s ability doesn’t look anything like a railgun. Did you see any rails? I didn’t think so.

Another possiblity is that Misaka is effectively creating rails out of thin air. By this I mean not that she’s summoning I-beams or something out of somewhere, but that she is making the air conduct electricity and thus serve as rails. Normally, air doesn’t conduct electricty, which is why you don’t get zapped until you stick your finger in the electrical socket. At high enough voltages, though, the air becomes conducting, and electricity can arc through the air. This is why, although current is what’s actually deadly, all of the warning signs near power stations read “DANGER: HIGH VOLTAGE.”

Well, arcs of electricty (like lightning bolts) are crooked, so this approach probably wouldn’t make very good rails. Most likely, she uses the “make a magnetic field in the air” approach. If the magnetic field were sufficiently focused, she could accelerate only the coin and possibly a few nearby objects. (No metal buttons or jewelry, and keep the spare ammo far away from the firing hand!)

So now we have a solid idea of what a railgun is and, in theory, how Misaka uses it. We can also look at how much voltage she’s producing and the initial velocity of her shots. 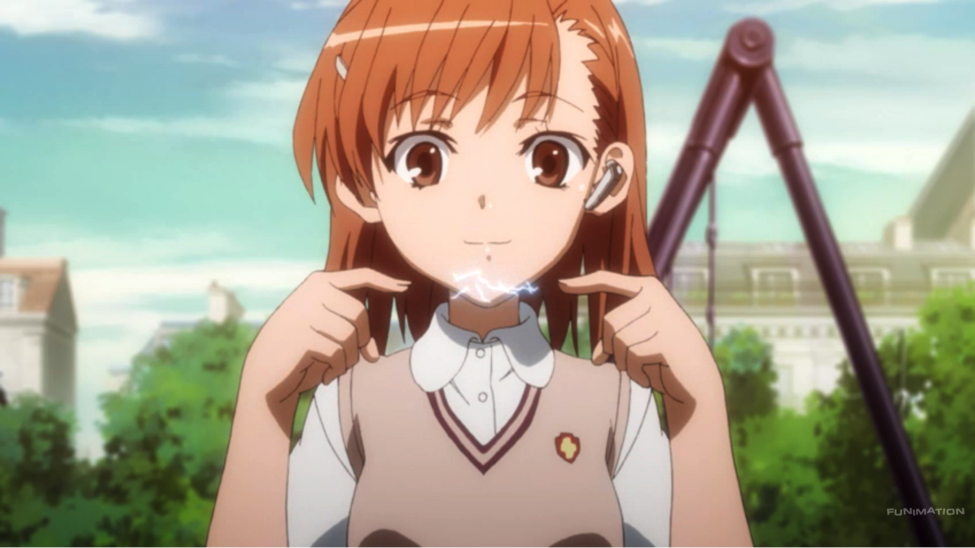 The dielectric strength of air, the electric field strength at which air stops being an insulator and starts conducting electricity, is about 300,000 volts/meter. Misaka’s fingers look to be about 10 cm apart in the above image (episode 3), so the voltage difference between her fingers is (300000V/m) * (0.1m) = 30,000 volts. This gives a lower bound on the maximum voltage she can produce.

Apparently, Misaka is capable of manipulating 100 million volts. Theoretically, then she should be able to electrocute people from (100 000 000 v) / (300 000 V/m) = 333.3 meters = 1,093 feet away! Of course, the attack is easily deflected by the presence of any electrically grounded objects in the area, so attempting this trick would instead cause lightning to strike at her feet instead. No wonder she grabs people before shocking them!

So we have a pretty good idea of how much voltage she can produce, but how powerful is her projectile attack?

According to her test results from episode 1 of the anime, Misaka has a “muzzle velocity” of 1030 m/s. This isn’t particularly impressive as far as railguns go; real railguns are capable of achieving speeds of around 5000m/s, and possibly more. Let’s leave that aside for now. (Aside: Misaka’s firing rate is given as 8 shots / minute, which actually is about how fast normal railguns can fire.)

For comparison, the M-16 rifle fires 4 gram bullets at 975 m/s, for an expected energy of 1901.25 joules. Given that the coins she fires are about the size of a US quarter (5 grams), Misaka should be doing a bit more damage than a good assault rifle. Instead, she does this much damage: 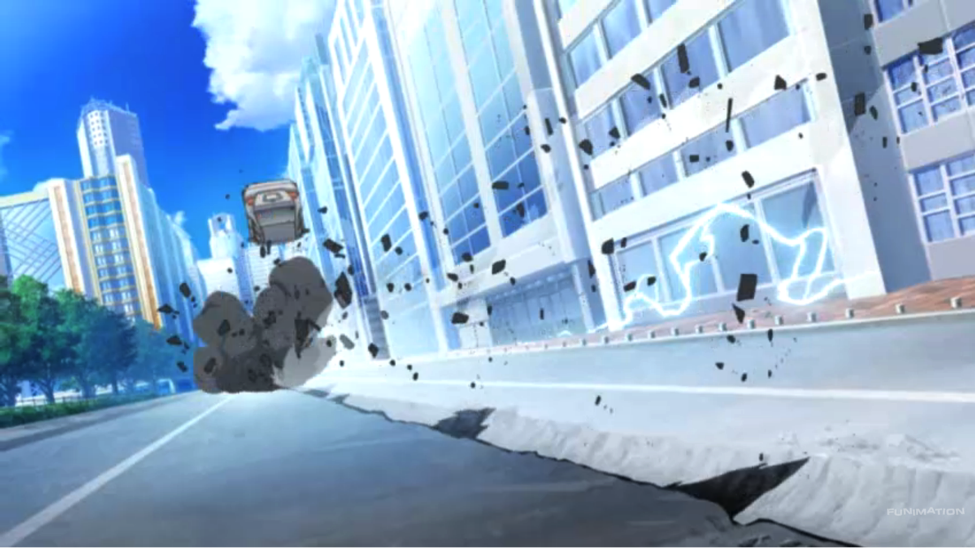 So Misaka’s “railgun” is doing more damage than it “should.” Suppose the given speed of 1030m/s is incorrect? Let’s try to calculate how fast the coins are actually going.

Consider the first episode, when Misaka fires her “railgun” at an oncoming car. We see the coin fly down this street: 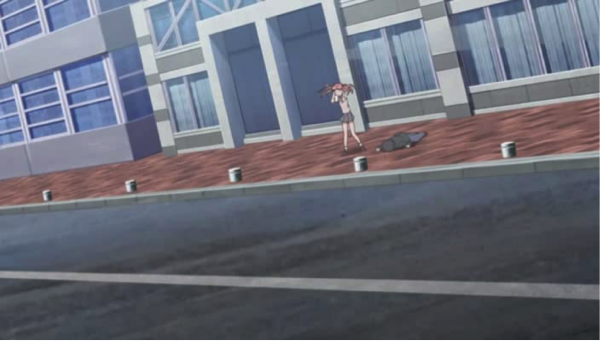 Assuming (generously) that Koroko is 150cm tall, then those posts are about 3 meters apart.

Between these two consecutive frames, the orange streak appears to travel about 10 posts down the street, or about 30 meters. Assuming that the anime is shot at a conventional 24 frames / second, this yields a speed of about (30m) / (1/24 s) = 720 m/s, even slower! Possibly, the coin is moving even faster than that and the orange line, like the groove in the ground, serves only to indicate where it has been. Let’s try another approach.

Misaka’s power is said to be so great that measurements have to be performed using the school’s pool to absorb the energy of the shot. Here is that pool: 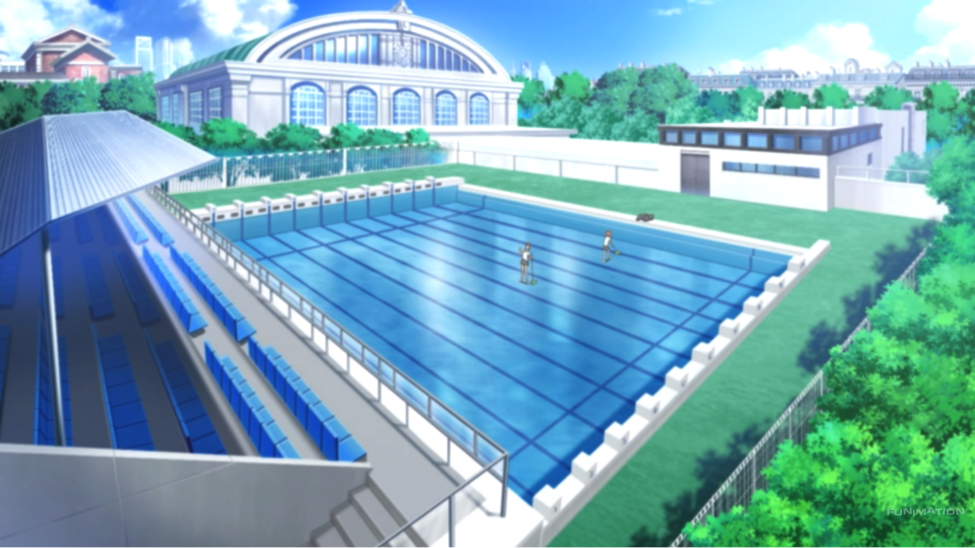 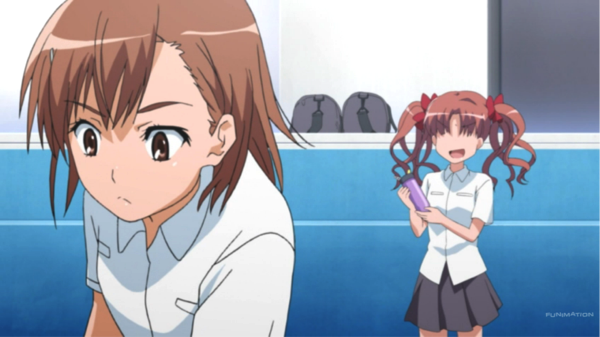 This is what happens when Misaka shoots the pool: 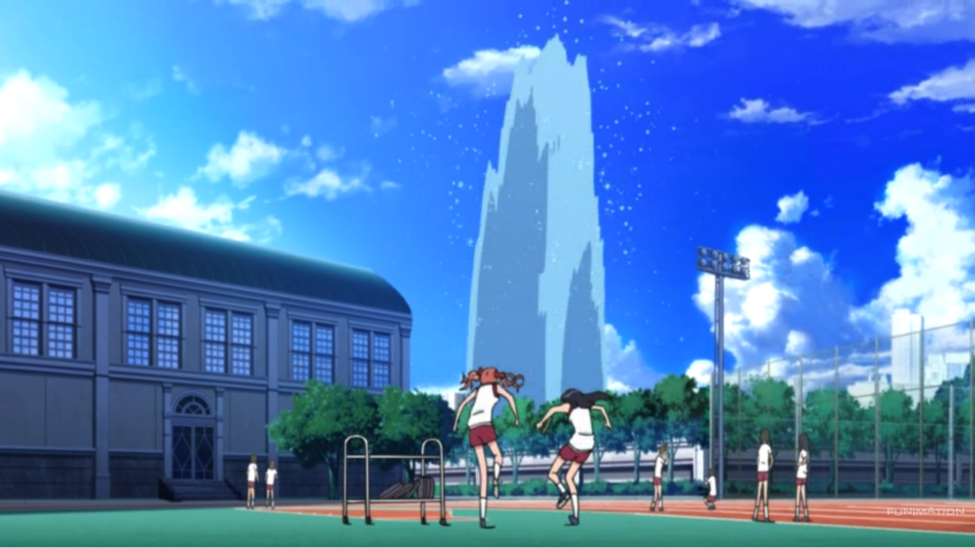 We could attempt to integrate over the volume of the wall of water, assume it’s half air, find its weight … or we could be lazy.

Let’s assume that 1/1000th of the pool’s water is shot up into the air each time Misaka fires. The pool contains (1.5m)*(21m)*(16.5m) = 519.75 m³ of water. The “center of mass” of the wall of water appears to be near the top of the building, which going by the tall stories and the height of the doors appears to be perhaps 10m tall. The energy it takes to lift an object is (mass of object) * (acceleration due to gravity) * (height you’re lifting it to). In this case, then, if we assume that all the energy of the shot goes into lifting the water (ignoring the energy spent warming the water up, creating a loud explosion, causing dramatic winds to swirl about), then we have:

This value happens to be around what “modern” railguns are capable of. Granted, at these sorts of speeds, depending on the composition of the coin, it may already have turned into molten slag due to friction heating from the air.

Regardless, we must respect the canon value of 1030m/s given in the anime. Perhaps the damage caused by Misaka’s ability is due to electromagnetic effects caused by the coin flying through the air?

Whew! Science, right? To see Misaka’s Railgun powers in action (and in HD!) be sure to order A Certain Scientific Railgun – The Complete Series on Blu-ray/DVD today! Check out the explosive trailer below!