Learn how our award-winning Collector's Editions were designed! Did you hear the news? This year, the Collector’s Editions for Fullmetal Alchemist, Black Lagoon, and Tokyo Ghoul were nationally recognized for excellence in packaging, design, and content. That means when you bring home one of these sets, you’re bringing home a winner. So, what does it take to create award-winning packaging? Let’s take a peek into the Funimation world!

Whenever we release a Collector’s Edition, our top priority is focusing on the love our fans have for each series. We consider different elements that would appeal to every fan and their unique sensibilities; look, feel, size, and exclusive elements that make every series special. Each of our designers has their own distinctive creative process when it comes to creating these sets. We sat down with some of our packaging designers, Melissa Frennea, TJ Larson, and Ian Bailon to discuss their ideas, processes, and the overall work that went into these award-winning designs. 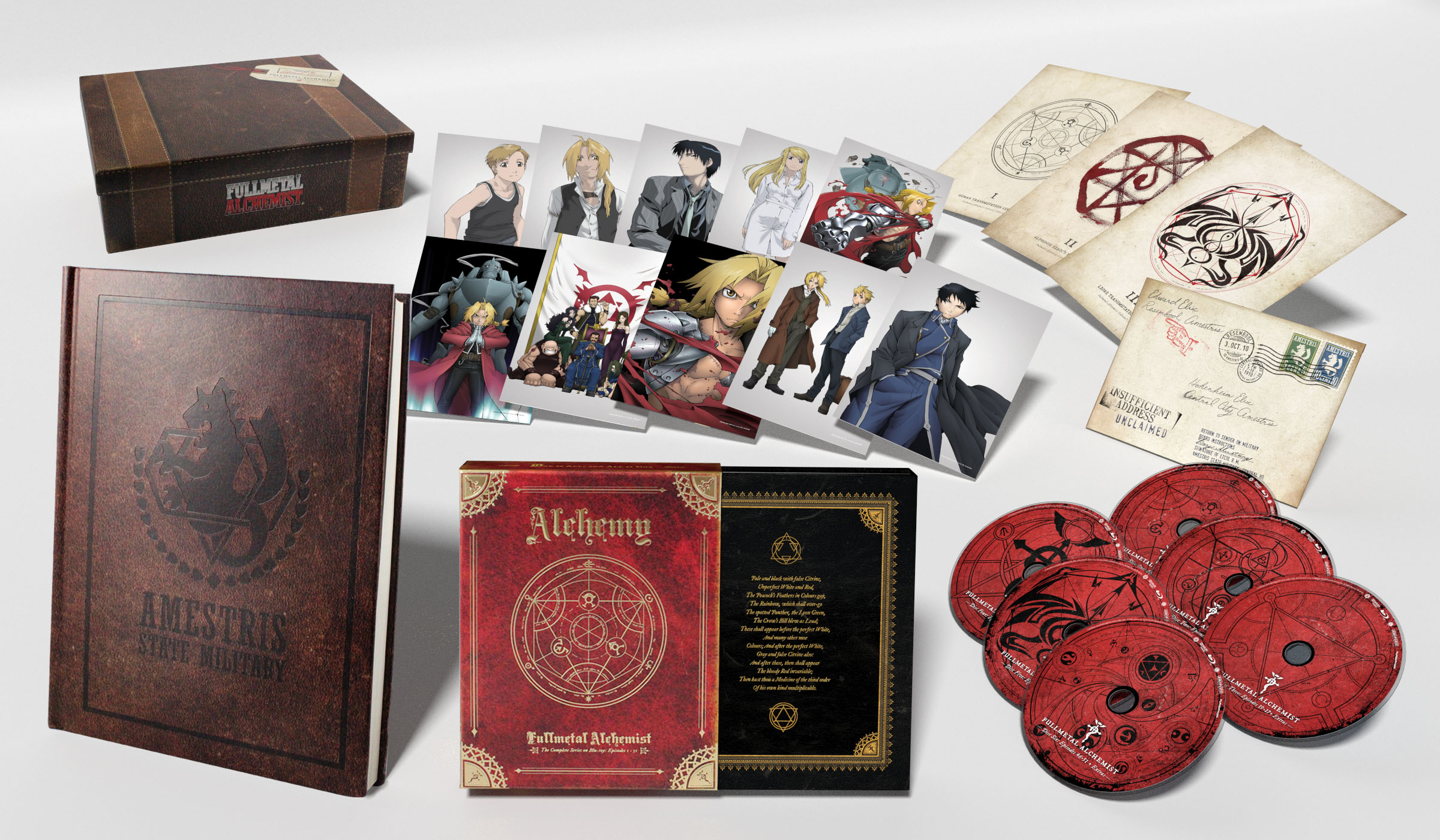 Q: Each of these sets has a special meaning and message that relates to the series. What was it you wanted to get across to the fans?

The idea behind the Fullmetal Alchemist Collector’s Edition was to create a journey for fans. We wanted to mimic the journey they experience when they watch and re-watch their favorite series. Personally, I am a huge FMA fan, so I put in hours of research into very specific elements relevant to the show. Things like historical alchemy, particular show and series details, and even fandom references. By tying these elements together, I wanted fans who love the series as much as I do to have a physical representation of that devotion.

The idea behind Black Lagoon was to put fans into the criminal underground world of Black Lagoon, making it as close to real and as gritty as possible. Everything from the box to the Blu-ray/DVD combo cover has details based on military-grade equipment. In a way, they have what they need to be soldiers of fortune. From an ammo box to military-issued dog tags—you can almost smell the gun powder in the air.

Ian B, Senior Graphic Designer, lead on Tokyo Ghoul Collector’s Edition:
Initially, I wanted to illicit a sense of fear with the loss of innocence. When the black slip is on the box, you see this dangerous face—the face of a Ghoul—but when it comes off, there’s this regular boy. I wanted this to show the transformation of Kaneki from a boy to a monster each time the slip is placed back on the box as a literal representation of his change throughout the series. This way, fans experience Kaneki’s change and become a monster with him, from the moment they open the box. I also used typography and colors that were based off of butcheries and charcuterie to allude a subtle but dangerous and animalistic hunger that is meant to be very unsettling and convey the fear felt by Kaneki as he struggled with his newfound hunger. 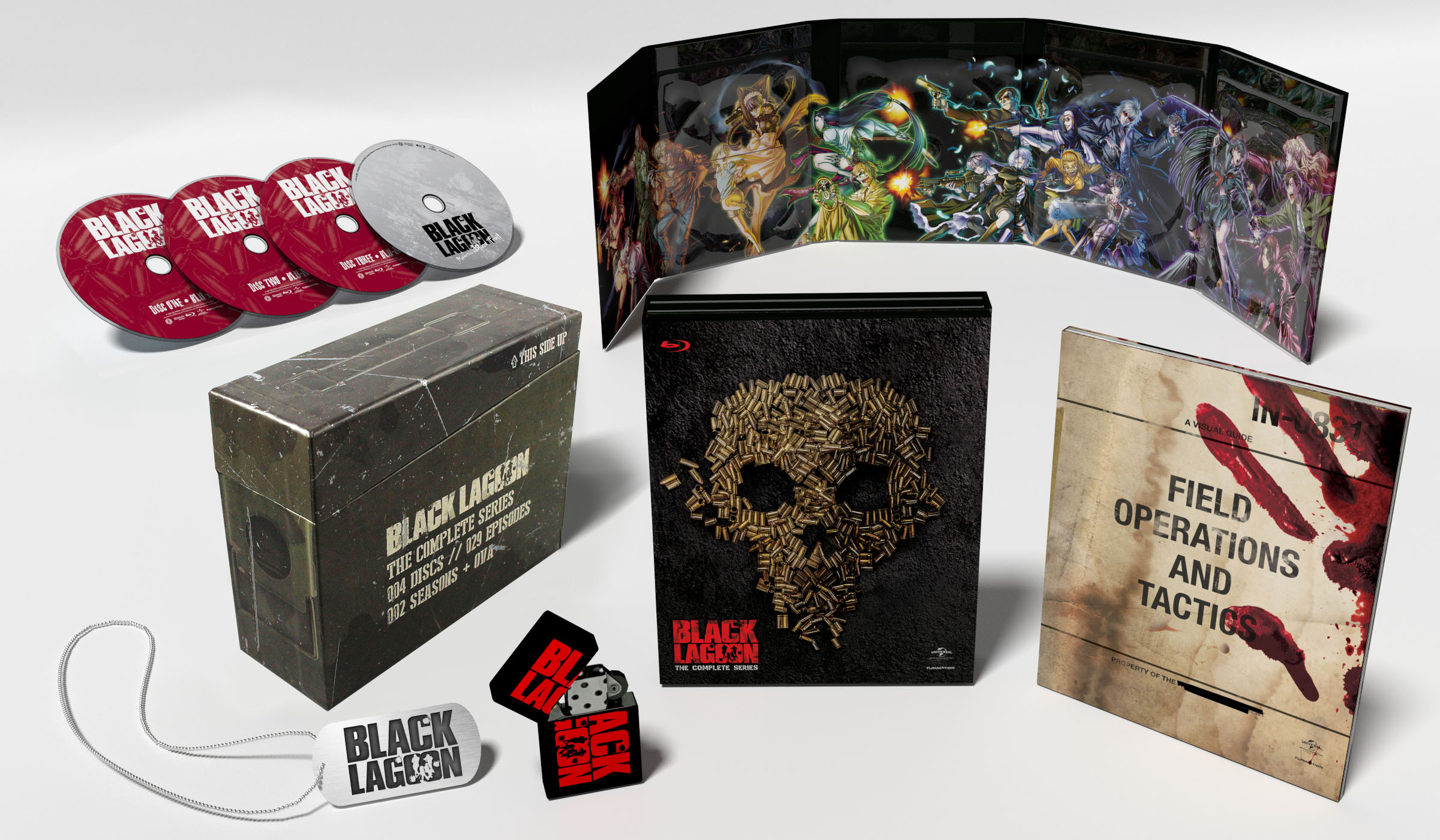 Q: Can you give us some insight into the process that went into creating the packaging?

I first started by re-watching the series very carefully. If I saw something interesting, like a book title, I took a screenshot, paused, and went online to research. Incidentally, we had a lot of snow days at the point I was working on it, so I curled up with my cat and got to researching. There were several moments where I was in awe of what I found – like discovering that soul bindings in historical alchemy are NOT recommended. Sorry Al!

For the art book, a lot of the additional drawings and such were redrawn by me. There were a few days where I was sitting at our art station with an actual quill, scratching away to reproduce an alchemical drawing. As soon as I laid out the text and art in InDesign, I’d switch over to Photoshop to write in little notes and draw some funny sketches. Parts of the art book feature an actual alchemical script and writing in the code for so long made me fluent! I also spent a lot of time looking at historical typefaces and trying to make sure I got the different periods right. It was also fun to pick fonts that could match the characters. I tried to find handwriting that fit their personalities.

To be as accurate as possible, I examined and referenced items in minute detail. For the digipak cover, I created a skull made up of over a hundred bullets. I took macro photos of hand-arranged 9mm and .45 bullets from dozens of angles then digitally manipulated them into a finished graphic. We embossed each bullet on the foil cover so there would be a striking visual and tactile experience when you held and looked at the digipak in the light. We also researched and referenced real ammo cans, ensuring the outer box was as close to the real thing as possible.

One of the most challenging aspects came in designing the guns on the back of the Blu-ray digipak. We had to remake these iconic guns completely from scratch because we didn’t have high resolution gun artwork or illustrations from the licensor. After spending hours researching and recreating the iconic weapons, they had to be licensor approved, approved, which meant there could be a risk that all the work we did would be for naught. Luckily, the design was approved and we were able to use our own original design of the series weaponry. 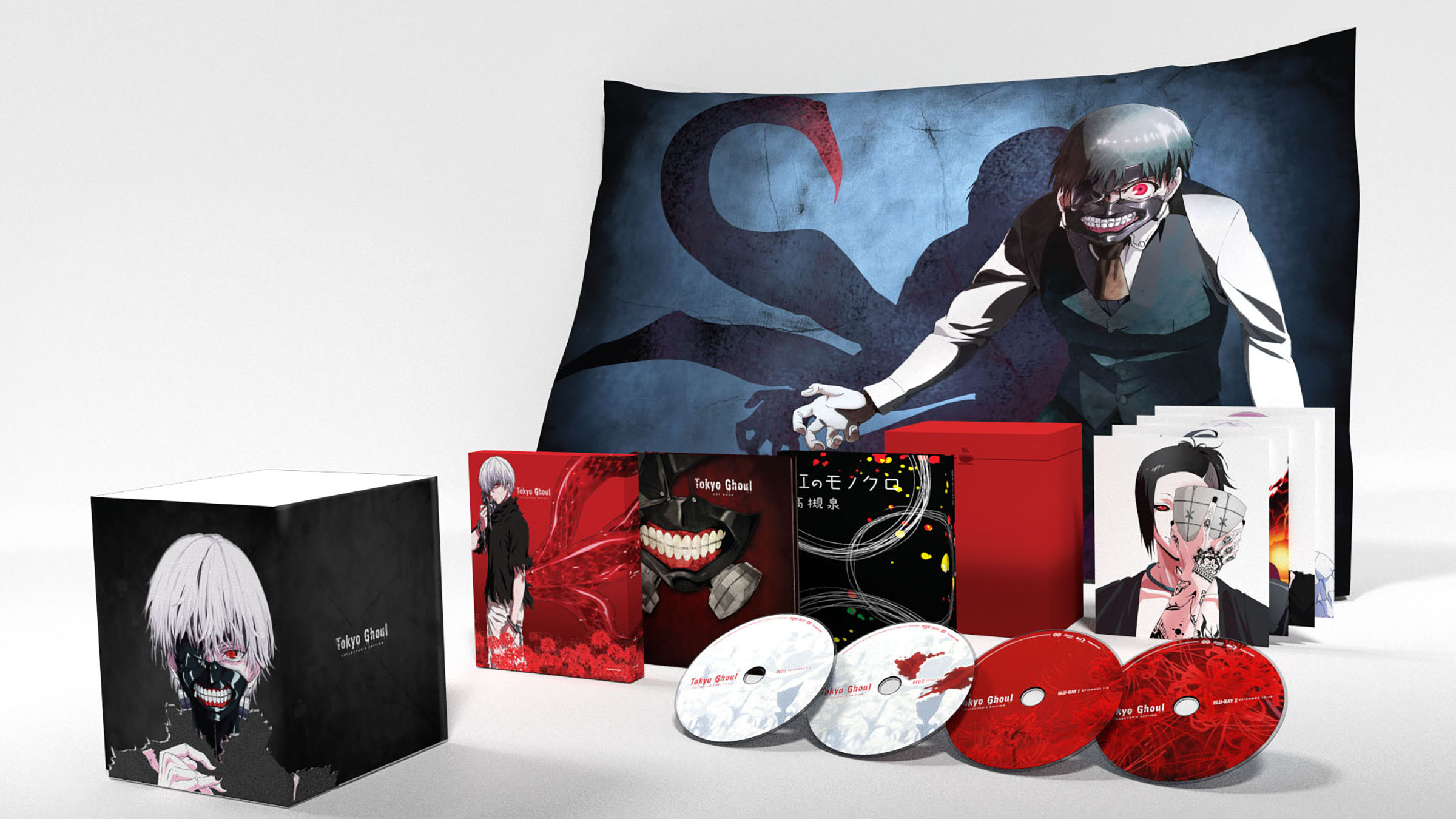 Q: What are some of the more unique details you included in the packaging? Any special Easter Eggs that fans should look for?

Because we are following Ed’s journey, I wanted the box to be a replica of Ed’s suitcase packed with all the things from his life. On the back of the suitcase you see travel stickers from various places he visited in the show. Some of them are peeled off more than others—these are the places he’d rather forget. Inside, you have an envelope with art cards. The envelope itself is conceptualized as if Ed had written a letter to his dad, but it was returned due to an insufficient address, a nod to the fact that Ed had mailed letters to his father numerous times only to never receive a response. This detail also references the fact that Roy showed up looking for Ed after receiving one of the letters at his office in Central. Many elements like this, tie into details fans may or may not realize in the series. 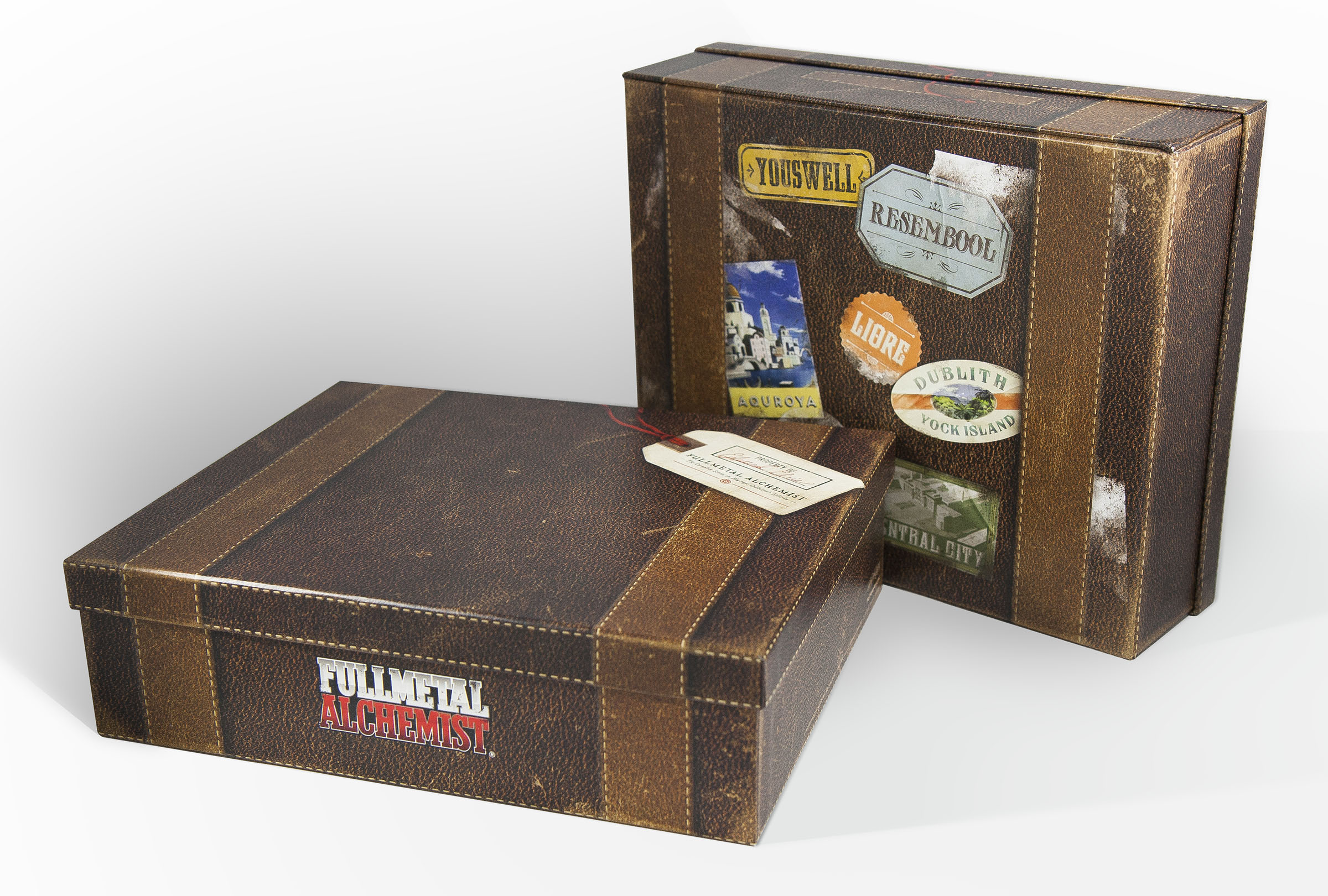 Like the envelope, there is more to the art book than what is on the surface. On the outside, it is designed to look like Ed’s military-issued state alchemist journal. We have it packed with character bios, illustrations, and interviews. Every page was carefully designed, containing little extras that are allusions to the show. Overall, the art book is supposed to feel very personal, like you’re really getting insight into Ed’s life. Things like tear drops on Hughes’ and Nina’s pages, a bloody thumbprint on the recipe for Mom; all of these emotional references drive home that this journal belongs to Ed.

We reviewed a wide range of pack-in ideas originally—lighter, dog tags, drink coasters, dice, playing cards, art cards, etc. We wanted to recreate the dog tags from the original release as a tie-in and the lighter was one of several character or show centric concepts we had. Revy and her smoking is very memorable and visible in the show so it made sense to pay her homage with a branded lighter. Not that we want to endorse smoking, of course, but the lighter turned out so cool!

With the characters in this show being mercenary/pirate types, we tried to bring in items that would be visible in their daily life and world. The coins on the back are actual images of real currency and the symbols on the ashtray are traditional Thai iconography. After all, the series takes place in Southeast Asia. The summary was formatted to look like an emergency report used for naval transcript reports. The content listing was created to look like an actual Declaration of Goods customs form used for ships. 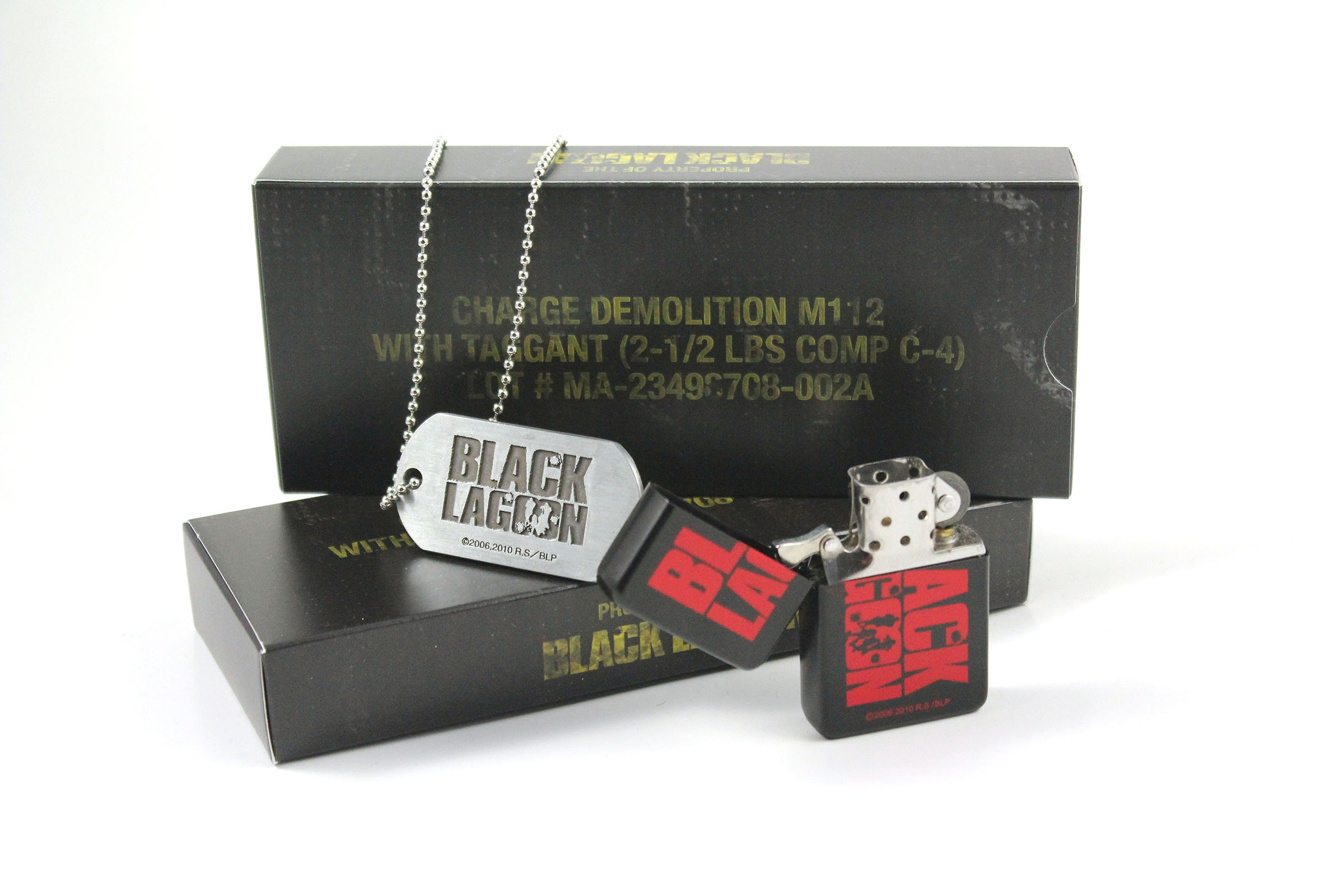 There are also details that show the tragedies of that profession and lifestyle; the bloody handprint, the dangerous weaponry and the distressed look and feel. Even the “block” that houses the lighter and dog tag uses actual verbiage from a C4 explosive charge that was slightly modified.

To put viewers in Kaneki’s world, I started with what occurs with they open the box. From removing Kaneki’s mask, even down to opening the box making it look like you are kind of beheading the two characters on the box, a monstrous action. On the other side, we have Rize to represent her being a part of him and inside his head, and representing the Ghoul that Kaneki will become. 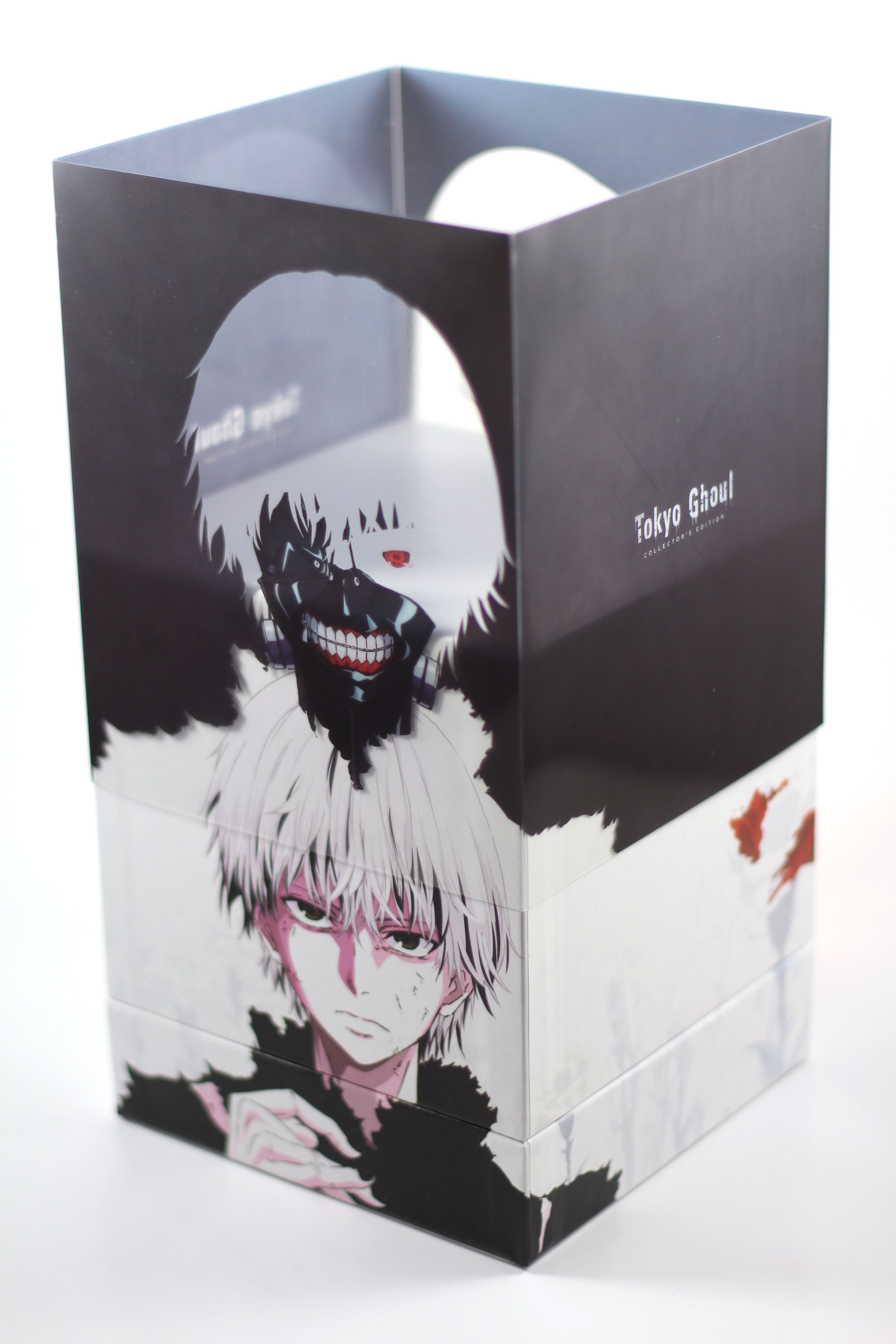 When it came to the extras, I’ve always liked it when you get items that are from the show, and since Kaneki is a bibliophile, it was nice to make a physical copy of the book that was given to him as a present in the show. It was like our present to the fans, except without the creepy-stalkerish-I-can’t-wait-to-eat-you vibe that Tsukiyama had. Plus, the barcode has a hidden message in it when you scan it with a barcode scanner.

There are other small details that fans of the show could easily pick up on like the coffee cup symbol on the inner box has the small logo that they have on the cups at the Anteiku coffee shop. But with the art book, I wanted there to be a subtle eeriness to it. The cover has a soft touch finish on it to emulate the feel of leather, matching the image of Kaneki’s mask, but on the other hand, it could very well be skin.

The amount of work that goes into our sets is truly inspiring and expresses that like you, we are huge fans. You can experience the journeys, the emotions, and the feeling of getting completely sucked into your favorite series for yourself when you pick up your own copy from The Funimation Shop!

Check out the gallery below for a closer look at these award-winning designs!