See what’s coming to our anime shop in October for home video release!

Attack on Titan: The Movie Part 1 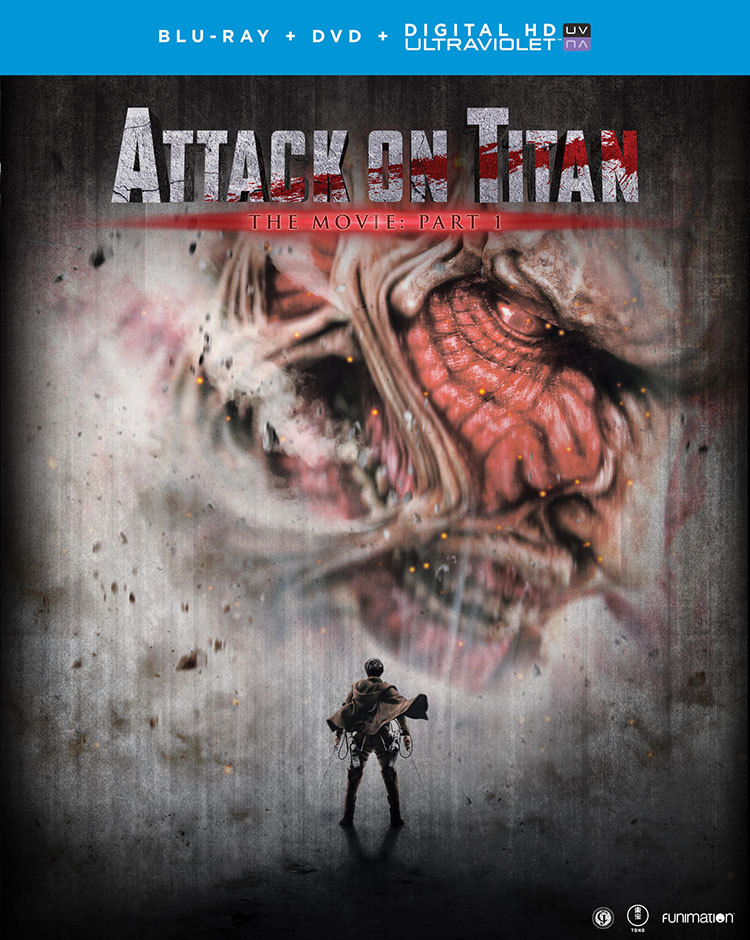 When the Titans first attacked, life for mankind was forever changed. Fearing the massive man-eating humanoids, survivors constructed three enormous walls for protection. From that point on, humanity lived safely behind the walls—for the time being.

A century later, life is peaceful. Eren and his friends live inside the walls, yearning to explore beyond the borders they’ve always known. But the opportunity comes sooner than expected when a Colossal Titan appears above the wall. With a single kick the barricade is pierced, allowing a swarm of titans to pour in and devour their newly exposed prey. Witnessing the devastation, Eren and his friends vow to destroy the man-eating terrors.

The future looks bleak, but there’s more to Eren than meets the eye: he may be humanity’s last hope against extinction.

Code Geass – Lelouch of the Rebellion

Click here to pre-order the Seasons One and Two Collector’s Edition (Blu-ray)!

Click here to pre-order Season One Blu-ray Only version!

In the year 2017 of the Imperial Calendar, parts of the world are under the control of the Holy Britannian Empire. Japan is now known as Area 11, the proud people treated as lower class citizens. Lelouch Lamperouge was once a Britannian prince but when his mother was assassinated, he was sent to Japan and thought to be killed. But he survived. After getting caught up in a terrorist attack, he encounters a strange girl known as C.C., who grants him the power of Geass and the ability to command others.

With his newfound powers, Lelouch becomes Zero, a rebel leader for justice, and forms his own anti-government group. His goals are simple: get answers about his mother’s murder and make a world that is worthy of his beloved little sister, Nunnally. Even with his Geass, Lelouch will encounter countless challenges. But nothing can prepare him to face his former best friend, Suzaku Kururugi, a Japanese citizen…and soldier of Britannia?

The power of Geass: is it a blessing…or a curse?

The Vision of Escaflowne

Click here to pre-order the Collector’s Edition (Parts One, Two, and Movie)!

Click here to pre-order the Part One Blu-ray and DVD Combo!

Click here to pre-order the Movie Blu-ray and DVD Combo!

A sweeping tale of love and war, The Vision of Escaflowne was a seminal series that influenced anime’s worldwide popularity. Directed by Kazuki Akane, this beautifully animated adventure features epic music, memorable characters, and an unforgettable love story. Hitomi Kanzaki is an ordinary high school girl who runs track and has an affinity for tarot reading. But when a brash young man named Van appears from a beam of light at her high school, Hitomi is spirited away to a myserious new world called Gaea. On Gaea, Hitomi is a stranger in a strange land. Soldiers in magnificent armored mechs, or Guymelefs, wreak havoc around her. Humanoid animals walk and talk like people, and foreign empires are embroiled in an increasingly violent war. On top of that, Hitomi discovers her ability to read tarot cards is due to a secret power more potent than she’d ever imagined, and her newfound ability makes her both an asset and a target. To save the world of Gaea and return to her own, Hitomi must unravel the mystery of her powers, Van’s past, and the powerful Escaflowne.

Hitomi Kanzaki is depressed. She feels isolated from her friends and family, and wants nothing more than to disappear. From her melancholy, the otherworldly presence of Lord Folken is summoned, and she is spirited away to the foreign world of Gaea. On Gaea, Hitomi is both feared and worshipped as the legendary Winged Goddess: a powerful being who can call to life the mystical Dragon Armor, Escaflowne. Hitomi is bewildered by the strange new world, where ships fly through the air, cat women walk and talk, and her apparent role as a goddess makes her a prized possession for several nefarious organizations. Hitomi finds a kindred spirit in the vengeful and headstrong King Van, who has sworn an oath of revenge against the Black Dragon Clan, who destroyed Van’s kingdom. Now, Van lives by the sword. And with Hitomi by his side, Van and Escaflowne will either lead the world of Gaea to harmony, or destruction.

The Neuroi, a large and dangerous alien race, still roam parts of the world leaving destruction in their path. The Strike Witches—a group of girls with extraordinary powers, formidable weapons, and advanced aircraft appendages—have made great strides against the Neuroi. But the war against them still rages on.

Yoshika Miyafuji was once a member of the Strike Witches and sacrificed the ability to use her powers in a major fight against the Neuroi. Unable to fight, she now wishes to pursue her dream of becoming a doctor and continue to help people. When new soldier and witch Shizuka Hattori comes to escort her to a prestigious European medical school, their journey becomes far more dangerous than originally planned. The Neuroi have changed, and their abilities are far stronger than before. Can the Strike Witches comes together once again to face their enemy? Or will they be able to without Yoshika’s abilities?

Luffy turns a mermaid auction into a pirate-style brawl when he knocks the snot out of a celestial dragon. The punch heard ˜round the island may have saved Camie, but it lands the Straw Hats squarely in the sights of the marines! Fellow pirates Trafalgar Law and Eustass Captain Kid buy the crew some time to escape, but the situation gets tricky when an army of Kuma-clone Pacifistas hit the scene. Things couldn’t get much worse for the Straw Hats. Or could they? Luffy is forced to watch in horror as Bartholomew Kuma makes his beloved friends vanish one by one until the rubberman ends up a lonely castaway on the island of Amazon Lily. After interrupting the sacred bathing hour of the gorgeous Warlord Boa Hancock, Luffy faces the very real fate of being turned to stone!

In Search of the Lost Future (SUB Only)

Kaori and Sou have been friends since childhood, so naturally everyone assumes they’re destined to be together. But after a tragic accident cuts Kaori’s life short, these star-crossed members of the Astronomy Club become entangled in a web of overlapping timelines and parallel universes. When the clock resets after Kaori’s death, her week begins just as it did before”only this time, as Sou and the other members of the Astronomy Club investigate a few mysterious rumors floating around the school, they stumble upon a very unconscious and very naked girl named Yui. She claims she has no memory of where she came from, but in reality she’s arrived from the future with an important mission: change Kaori’s fate and ensure a brighter future for Sou and the rest the Astronomy Club.

She’s a thief. A killer. A saint and a scandal. She’s whatever you need her to be to get the job done. After sizing you up with one sinful glance, she disarms you with a touch. You’re powerless to resist. She’s walking seduction, with an insatiable itch for the priceless and a fetish for mischief. She takes your breath away to get what she wants. She takes everything else just because she can. It’s all in a night’s work for the woman called Fujiko Mine. She’s the slinky, sultry thread that holds Lupin III’s crew together “ and this is the heist that started it all.

Do you love a good prank? Does your sense of humor border on sadistic? Then you’ll love Level E, a hilariously twisted new series from the creator of Yu Yu Hakusho and Hunter X Hunter that’s unlike anything you’ve ever seen! This extraterrestrial adventure follows the alien genius, Prince Baka (masterfully portrayed by anime legend Vic Mignogna) as he turns life on Earth into his own personal laugh track. The Prince has the biggest brain in the galaxy, and he’s also a sadistic prankster who loves to make humans squirm. Anime fans will fall hard for this nostalgic, undeniably clever series that spoofs the television shows, video games, and superheroes they loved as kids. You’ll laugh, you’ll cry, you’ll remember that thing you did that was super mean “ but also super hilarious. (Don’t worry, you won’t get grounded.) So yeah, Level E. The alien invasion has begun. Prepare to die “ laughing.

The creators of Blood “ the Last Vampire and Blood+ team up with renowned powerhouse CLAMP to inject beauty into a chilling new addition to the Blood line. Horrifying beasts with a hunger for human flesh prey on the citizens of a quiet town. In moonlit twilight, Saya slays the monsters and returns home drenched in blood. As the attacks increase in frequency and intensity, her enemies relay cryptic messages about a broken contract. Limbs are torn from flesh and skulls are crushed and devoured while the huntress struggles with paralyzing visions and gaping holes in her memory. When the humans Saya promised to protect reveal the sickening truth about her role in the violence, she learns her mission isn’t as clear cut as she thought”and her most sadistic foe of all is so close she can taste it.

Combining killer action from the creators of Ghost in the Shell with hauntingly beautiful art from the makers of X, this award-winning film is the latest masterpiece in the Blood: The Last Vampire franchise. Saya is part human, part monster, and has one thing on her mind: REVENGE. Visions of twisted experiments and creatures slaughtering everyone she loved fuel her thirst for vengeance. With blade in hand and rage boiling in her veins, she tracks her tormentor to Tokyo”where flesh-hungry beasts have begun to feed. There, she joins a group of young hackers hunting for the same man. As Saya slices her way through lies, traps, flesh, and bone, how much blood will she shed to cut down the mastermind behind her madness?