Funimation
This is the introduction to a personal multi-part editorial series, from social media coordinator Godswill Ugwa.

One of the most important elements of the anime genre is the music. From the opening of a series to the overall soundtrack right up to the ending of an episode, music has an important hand in crafting a series. Even outside of the show, music aids greatly in the promotion and in keeping the spirit of the show alive. Through this editorial series, I’ll be taking a look at many different aspects of the relationship of anime and music.

To start this editorial series off, I wanted to look at some soundtracks from some of the biggest musically-inclined anime this year, Blood Blockade Battlefront and The Boy and The Beast (Funimation titles only in this particular post). Our friends at Milan Records worked with us in creating soundtrack CDs, and I was lucky enough to grab a CD (or 2) for myself. I’m no expert when it comes to music — and definitely not a reviewer — I simply listened to each soundtrack and I am sharing my journey with each.

Listening to this soundtrack makes me feel like I’ve moved to the big city and I’m figuring things out as I go. I start out youthful and hopeful as I walk around in awe of the city. Everything is moving at a fast pace as I stumble around lost. A few weeks later I feel a little homesick and I’m missing my hometown, but I persevere and focus on making it in this new city. I explore new places; many of them are super strange but exciting and cool in their own way. And towards the end of the soundtrack, I feel like I’m more mature and I’ve learned many things about myself and the world around me.

I told you I’m no music critic –I don’t know anyone else who tells weird stories like that — but it is what I imagine when I hear this soundtrack. Just like how the pace of a city changes changes on a dime, this soundtrack is constantly changing. To give you an example: it starts out cool and jazzy with an optimistic flair in tracks like “Footloose” and “Catch Me If You Can“, but wastes no time getting introspective and even a little somber in “On My Own“. Then immediately following those tracks, things pick back up, almost as if we were never sad in “Sidewinder“. That pace continues to grow until things get quirky in tracks like “Toy Blues“.  From there, the change continues non-stop. Suddenly I’m on a world tour from African beats, to French lyrics, and more. Finally, after so many turns I’ve made it back to where I started, but this time more aware of what’s going on.

Overall I really enjoyed this album. I am bummed that the standout opening and ending songs that helped make this show stand out aren’t on here, but I am happy with most of the music that found its place here. To say that the album is quirky almost doesn’t do it justice. It’s a trip. I honestly felt like I went places while listening to this album – and not just because I listened to this album mostly while driving. I went on emotional trips, trips down memory lane, and on a world tour with Leonardo my man. I somehow imagined new adventures for Leonardo and the rest of the cast with this music. My favorite tracks on this were “On My Own“, “It’s Magic“, and “Catch Me If You Can“.

This is gonna be an album you’re gonna want to get along with a copy of Blood Blockade Battlefront! Get it here on Milan Record’s site!

Also if you want to see the inspiration behind the soundtrack, see the interview with composer Taisei Iwasaki right below!

The Boy and The Beast Soundtrack 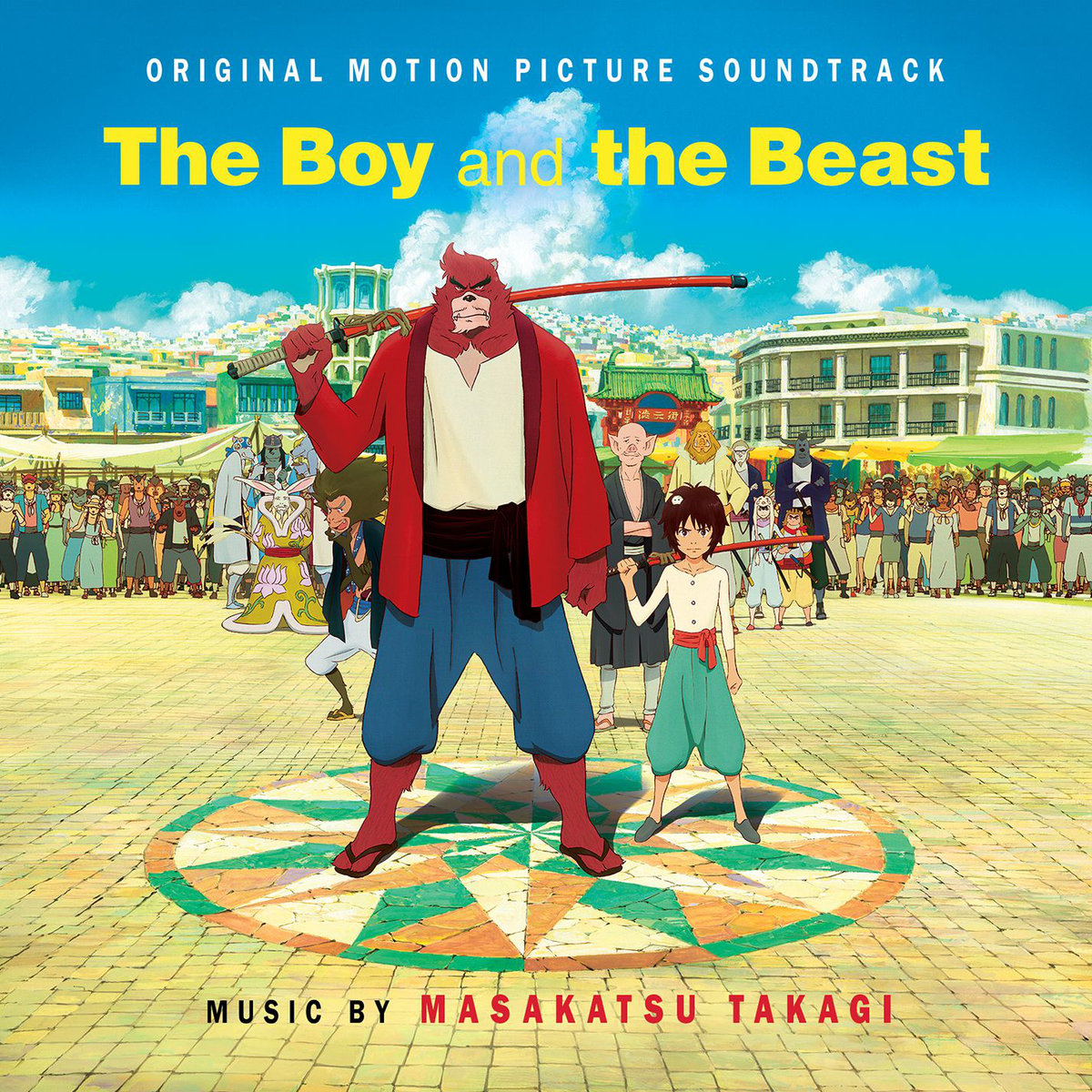 Bottom line: This soundtrack made me feel like I walked through Asia and I learned how to harness my chi. I loved it and urge you to check out this soundtrack especially if you loved this movie.

Things started a bit unwillingly at first, but through the music’s progression, I found someone who was able to show me the path I’d need to go on. I was able to see what greatness looked like early on and then I set out to make my own greatness. Halfway through my journey, I became very nostalgic about my boyhood, almost as if I had to hearken back to dreams of the past to figure out why I wanted to go forward. After more training, it was time to do battle, but this time with my own demons. Barely making it through that, I grew up, but now I have FIGHTING SPIRIT AND SUPERPOWERS! On the real though, I gained wisdom and knowledge that made me into a better person. I then celebrated like a One Piece pirate before going on to the next adventure. Yes, I did actually get all that while listening to this album.

Like Blood Blockade Battlefront’s soundtrack, this one also takes you on a journey — but it’s more focused than Blood Blockade Battlefront’s journey. Although the destination isn’t clear, it’s definite that we’re on the way to becoming a better person. The soundtrack starts out with a hint of the grandiose and noble nature to come in the first track, but it gets nebulous immediately afterwards with “Stray Boy“. The tempo and tone grows and grows until it hits “The Beast Sinfonia“. Right after that climax, it gets introspective, but still happy. Childhood nostalgia comes in full force with tracks like “Boys Under The Summer Sky” and “Wonderful Adventures” but then it’s back to business after a while. “Darkness” sets in (I’m not sorry for that bad pun) and the boss battle of inner demons comes once we reach the track, “The Whale“. But after getting through the dark tones, there’s a sense of achievement, and celebration and wisdom come slowly in the aftermath of the fight in “My Name“.

Once again this is another soundtrack that I really dig. I feel the need to put on my sweats and train. I feel the need to go write in my journal. I feel the need to become a better person while listening to this album. It was an enjoyable trip that flowed nicely, yet it took me to unexplored territory. My favorite tracks were “The Beast Sinfonia“, “Horizon“, and “What Sustains You From The Inside“. Be sure to get this album as well as the movie! And listen to the interview with composer Masakatsu Takagi below.