Do you want to watch Danganronpa 3: The End of Hope’s Peak High School, but need a recap of the first season (and the second game)? Do you want to know who that crazy bear is with the black/white “Two-Face” scheme? Do you want to understand what despair is and why everyone is looking for it? Look no further – we’ve got a quick run-down of some key events from the first season/game and the second game to help prepare you for both the Future Arc & Despair Arc of Danganronpa 3: The End of Hope’s Peak High School. 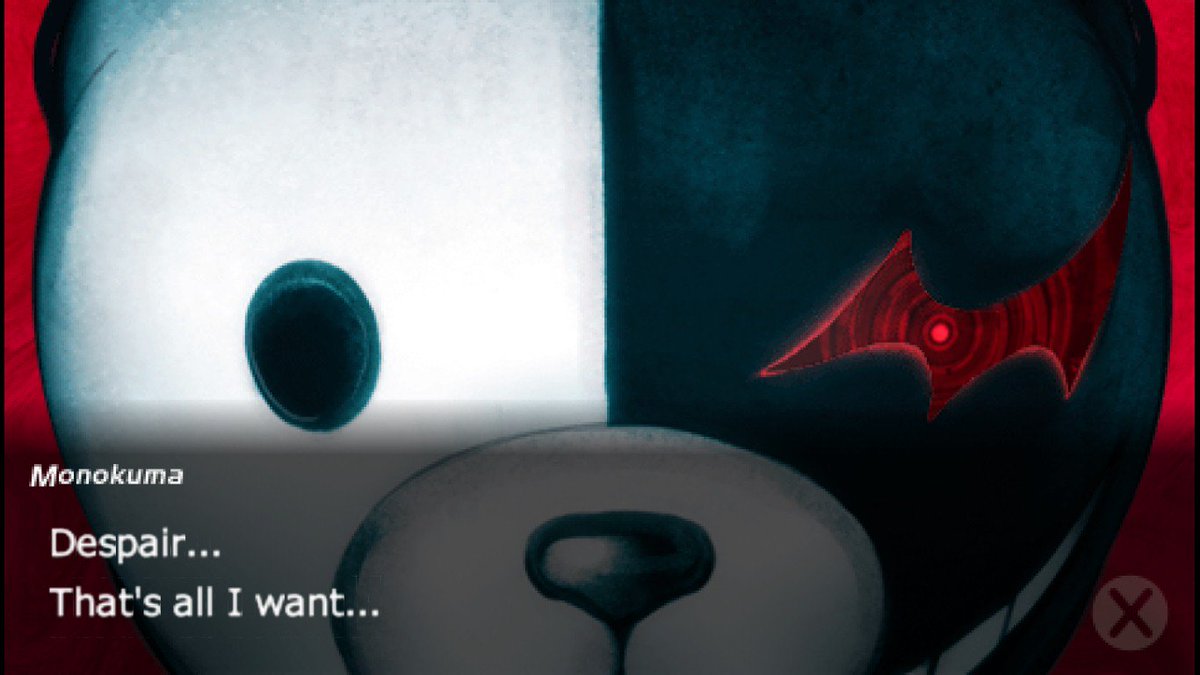 (WARNING: There ARE spoilers ahead for Season 1 of the first Danganronpa anime and game, and for the second Danganronpa game, so proceed with caution!)

Overview of the Game

Take a seat young student and learn about the crazy school of Hope’s Peak Academy! We begin the first game in control of the hapless and extremely average boy named Makoto Naegi. He is known as the (Super High School Level) Ultimate Lucky student for being chosen in a high-stakes lottery to enter Hope’s Peak Academy: the best school in the land which hosts the top students around, the school that picks its students rather than allow open admission, and the school that is known to guarantee its students with life success. The typical entrants are known as the best in their respective fields; some students in this class include the Ultimate Swimmer, the Ultimate Otaku/Fanfic Creator , the Ultimate Novelist, and the Ultimate Fashionista . 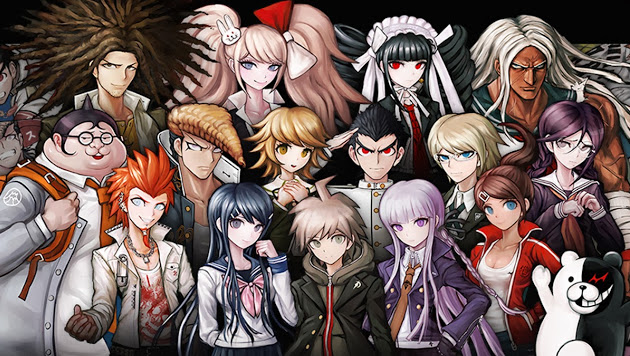 Upon entering on the first day, however, he passes out and wakes up in a classroom with 15 other students. The doors and windows that lead to outside the school are sealed with unmovable iron plates, there are monitors and cameras in every room, and the 16  students are the only living people in the school. They are met by a strange bear named Monokuma that talks like an Elmo doll with the cutest laugh, but is deadly serious with his command for respect of the given rules and that the students are to engage in a death game.

The students are to kill another student in order to escape the school that has become their prison. If the killer can get away with their murder without being convicted in the trial that immediately follows a murder, then that student alone can leave while everyone gets executed; however, if the murderer is found out then he will be executed alone. All the while, the everyday actions of the students are broadcasted to viewers in the outside world. Of course, everyone is incredulous and they fight against these crazy demands and this strange toy. However, in engaging in physical violence with Monokuma, a sacrifice is made immediately where the Ultimate “Fashionista “, Junko Enoshima, is killed to demonstrate that disobedience will not be allowed. The students must participate in every class trial and must abide by the rules, or they face the same fate as this example. 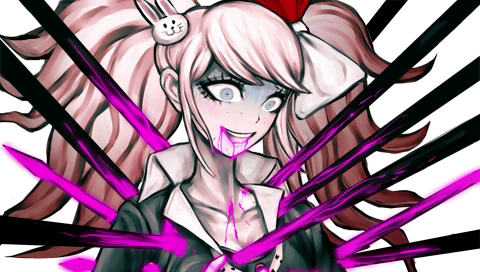 Monokuma incentivizes the murders by holding the student’s families ransom, threatening to blackmail intimate secrets, offering ridiculously outrageous amounts of money, and even turning the students on each other with mentions of a traitor. These elements, including their declining numbers and constant monitoring, eventually wear down the student’s sanity. As more murders happen, the students get closer to figuring out the mystery of why they are trapped within the school, why they have to commit these heinous acts, and who is controlling the whole situation.

The Infamous Fifth and Sixth Trials

Moving onto the fifth of six trials (by the way you should definitely check out all of the anime or the game as each trial is inventive and surprising), things get even more surprising when a mysterious corpse is found that doesn’t belong to any of the established 15 students, and it is uncertain who killed this person. As the student’s approach the body to begin the investigation, the corpse literally explodes, destroying most of the evidence. During the trial, the student’s discover there was a mystery 16th student who started school with the rest of the group, but no one seems to remembers her. Also, it is this is a set-up from Monokuma to get rid of Kyoko Kirigiri, who had been digging around too close to Monokuma’s secrets. But instead the protagonist, Makoto Naegi, takes the fall and is set up to be executed in her stead. However, the execution is interrupted and Naegi is dumped in a trash heap under the school.

Naegi gets rescued by Kyoko, whose ultimate talent is revealed as Ultimate Detective, and they challenge Monokuma to one more trial to prove that the fifth case was a mistrial. Monokuma agrees but raises the stakes by saying that the students must solve all the mysteries — including why they are stuck in the school, the identity of Monokuma, and the mystery behind their memories — or they will all face execution. If they are successful, then the students will be freed. For preparation of this case, every room of the school is unlocked allowing the students to see many new secrets. The remaining students discover images and proof in their investigation that show them enjoying their normal school life as Hope Peak’s Academy students. The students were also able to verify that the 16 students who started this murder game were actually the only living entities to be in the school, confirming that Monokuma is actually a student.

Within the lengthy and tortuous last trial, many secrets come out. It is verified that the unknown corpse of the 5th trial belonged to the Ultimate Mercenary, Mukuro Ikusaba who was actually killed at the beginning of the whole death game. It’s revealed that Mukuro was Junko Enoshima’s twin sister and she went undercover as the Ultimate Fashionista, Junko Enoshima, but was betrayed and skewered by Monokuma. That body was preserved in a cryogenic freezer and reused to frame a student. It is then found out that the person behind Monokuma is Junko Enoshima, and that Junko and her sister Mukuro shared the title of Ultimate Despairs. After being found out, Junko shares info on the outside world and how it is horribly damaged from The Biggest, Most Awful, Most Tragic Event in Human History. Junko also shares the truth that the students did share a year of school life together in Hope’s Peak’s Academy prior to the Tragedy, and they did not remember due to her wiping their memories.  She reveals the students all individually volunteered to be kept in the school, in an effort to help preserve hope. 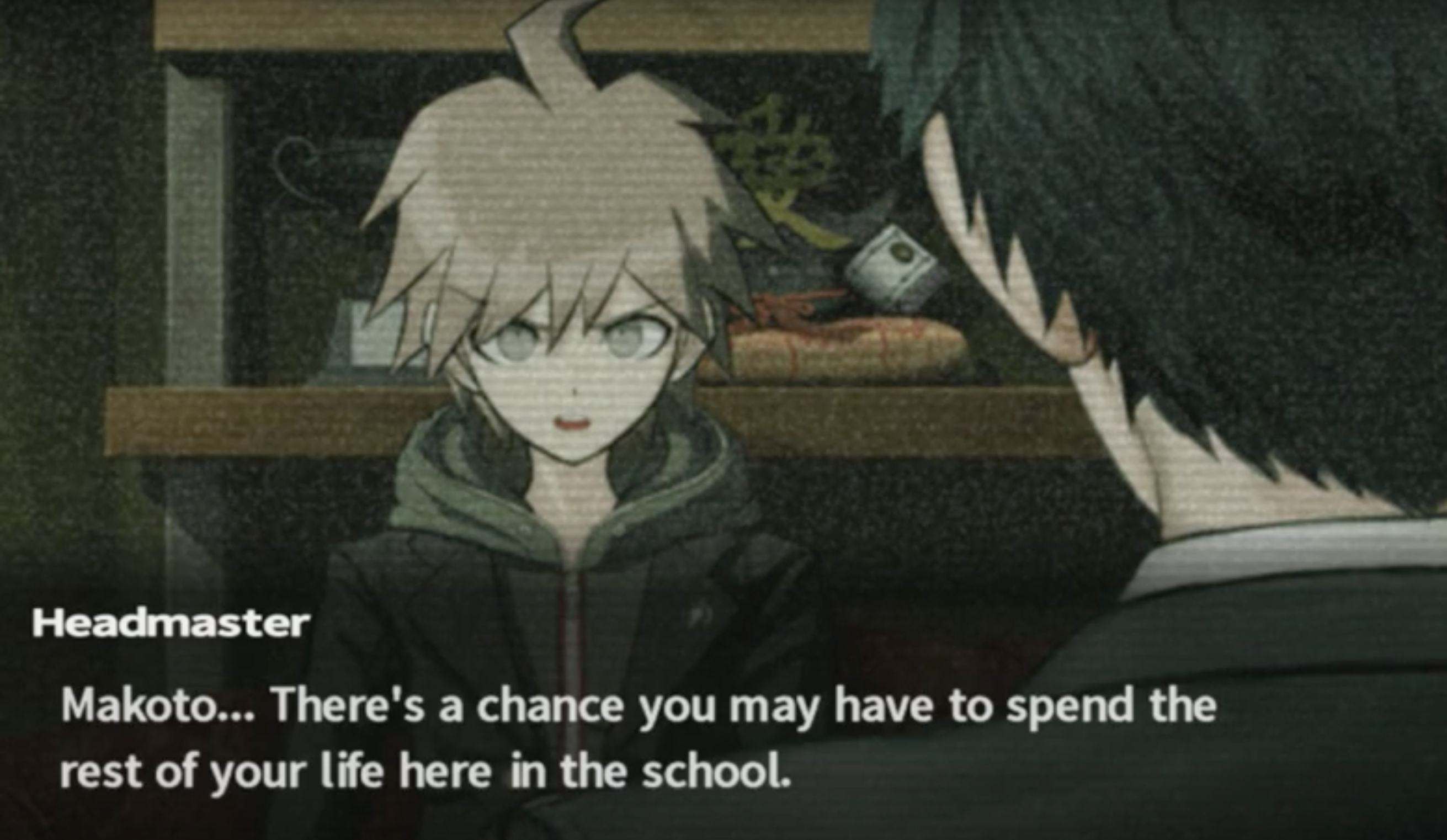 Having to accept the truth of their situation throws the remaining students into deep despair (just as Junko planned!!), but Makoto Naegi pulls through and reinvigorates his classmates as Ultimate Hope. Together, the remaining students successfully solve all the mysteries of Hopes Peak Academy, the mystery behind their memories, and convict Junko of murder and decide to leave the school. Junko is then executed in a stunning fashion and the students are freed. But Monokuma is shown to live by the end of the ordeal. 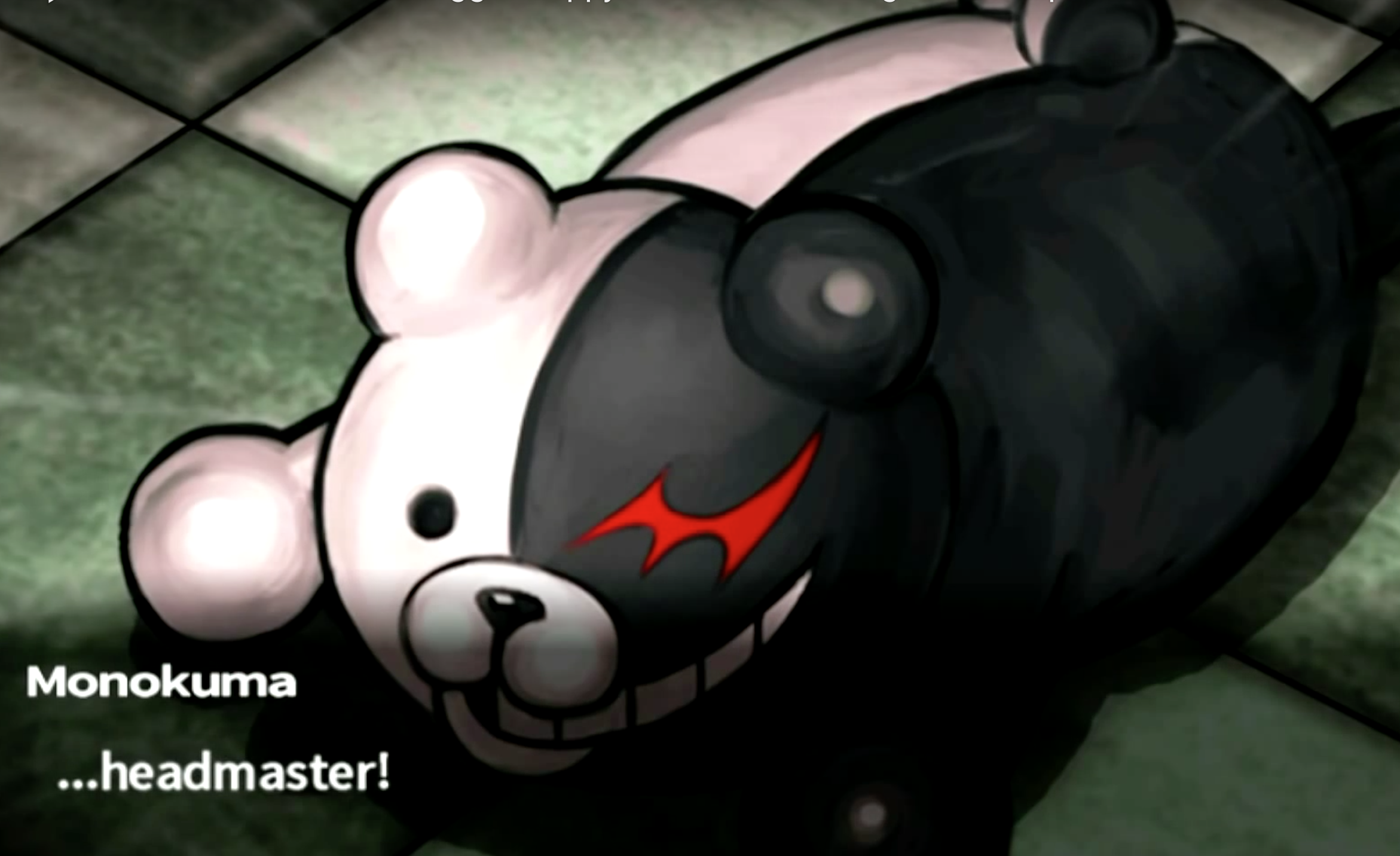 The second Dangranronpa game follows a new cast of 16 students who find themselves trapped on an island with their memories wiped. They meet a (weirdly Monokuma look-alike) bunny named Usami, who introduces herself as the leader of the class’ school island trip. She tells the students the purpose of their trip is to spread hope, love, and joy. After the students begin adjusting to their peaceful island life, Monokuma appears and wreaks havoc. He strips Usami of her power and tells the 16 students they’re part of a new death game and the only way off the island is to kill!

After the first murder and trial, Monokuma presents another incentive for the students to kill in the form of an arcade cabinet titled Twilight Syndrome Murder Case. The game features five girls and one boy, who the game names Girl A, Girl B, Girl C, Girl D, Girl E, and Guy F. Anyone who beat the game collected a grand prize, a document containing information from the student’s missing memories. 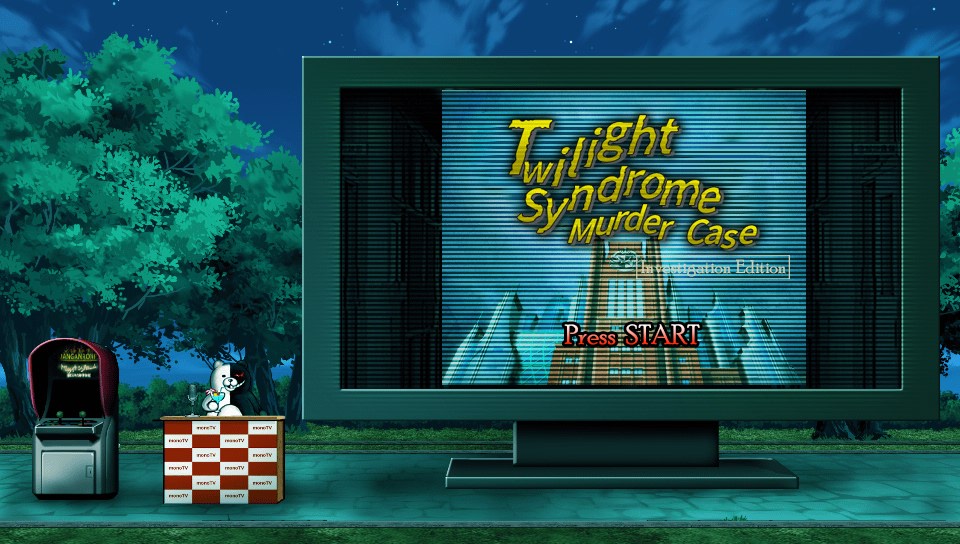 During the trial, it’s revealed that the events unfolding in the Twilight Syndrome Murder Case game relate directly to the students trapped on the island. Here’s who each character in the game is revealed to be: 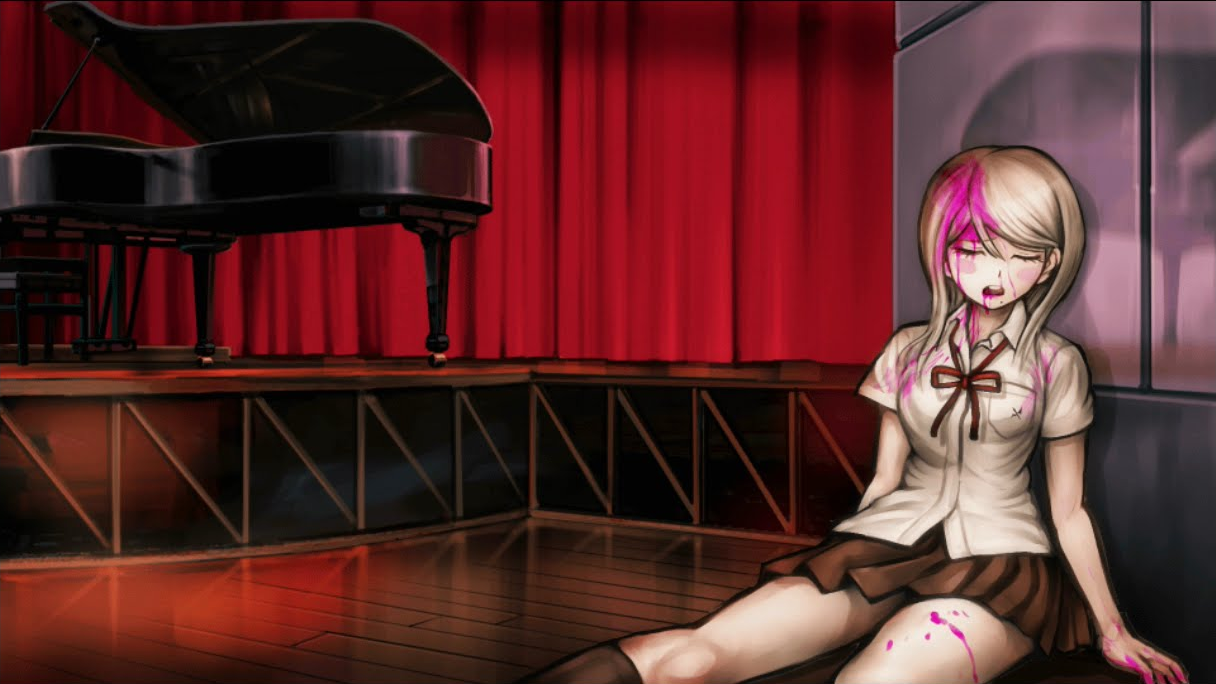 The grand prize for beating the game, the document containing missing memories, contained images of each girl, Mikan, Hiyoko, Ibuki, & Mahiru, in their school uniforms laughing together. It also contained images of the murder committed in the game, showing Natsumi Kuzuryu’s corpse as well as Girl E, Sato’s corpse. This trial is a key trial in Danganronpa 2 to help unlock the mystery behind the student’s memories. Monokuma reveals that there is a traitor among the students at the end of this trial.

Each new murder and trial help unlock key mysteries behind the student’s missing memories. During the fourth chapter, Nagito Komeada completes Monokuma’s Final Dead Game and beat Russian roulette on a high difficulty. After he learned the secret to solving the fourth trial and obtained a file that unlocked the mystery behind the 16 student’s pasts. Nagito discovers that the 16 students were all Ultimate Despairs, followers of Junko Enoshima, and that Hinata Hajime is a reserve course student with no Ultimate talent.

Armed with this new information, Nagito attempts in the fifth trial to “spread hope” by forcing the remaining students (aka Ultimate Despairs) into a despair-inducing unsolveable murder or by outing the traitor. He is of the belief that that Ultimate Hope is created through defeating Ultimate Despair. Nagito’s Ultimate Luck leads the others to find the traitor, and his murderer, Chiaki Nanami, and she and Usami are executed. 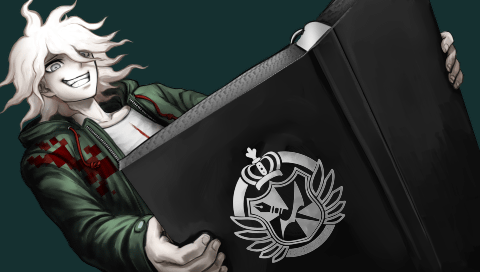 This leads to the big reveal that entirety of Danganronpa 2: Goodbye Despair actually takes place within a video game called the Neo World Program. Makoto Naegi came across the remnants of despair and saw a fragment of hope in them and so initiated an attempt to bring them back to the side of hope. The program erased all of the student’s memories pre-tragedy, and thus they all appeared in the program in their pre-despair forms. Makoto believed if he could replace their despair filled memories with happy memories in the program they would never fall into despair. However, the Remnants of Despair knew of Makoto’s plan to rehabilitate them and willingly entered the Neo World Program. An Alter-Ego version of Junko Enoshima (and Monokuma) was uploaded into the mainframe, which caused the entire thing to go off the rails. They planned to allow Junko Enoshima’s consciousness to take over their bodies after they erased each other’s avatars in the program. 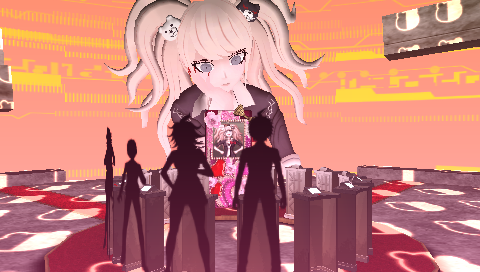 We also find out that Hajime underwent an experiment conducted on him by Hope’s Peak Academy superiors in an effort to create the Ultimate Hope, someone with the ability to mimic/execute any talent at an ultimate level. After going through the experiment, Hajime no longer remembers his life as Hajime Hinata and became imprinted with the memories, habits, and personality of Hope’s Peak Academy’s founder, Izuru Kamukura. As Izuru, he looks very different, having long hair and red eyes. We also find out that Hajime/Izuru is the one who infected the Neo World Program with Junko Enoshima’s consciousness (and Monokuma). Eventually the kids defeat Junko Enoshima (again) and escape the simulation with some help from Byakuya Togami, Kyoko Kirigiri, and Makoto Naegi. However it’s unclear if the five remaining Ultimate Despairs retain any of their memories from inside the simulation. Makoto hopes that they will not revert into despair, and leaves the students on Jabberwocky Island to rehabilitate their fallen classmates. From here, Makoto is summoned to the Future Foundation on grounds of treason. (START FUTURE ARC)