Meet the Characters from Drifters

In preparation for the English SimulDub premiere of Drifters, we want to help you get to know the historical, and dangerous, cast of characters. So strap in, because it’s time for a deadly history lesson.

From the creator and team behind Hellsing comes a thrilling story where history and fantasy collide. Shimazu Toyohisa, a famous samurai who fought in the historical Battle of Sekigahara, is transported to another world when only moments from death. From that moment on, he becomes part of a group known as “Drifters” and is forced to battlea gainst other legendary warriors in an ultimate death game. 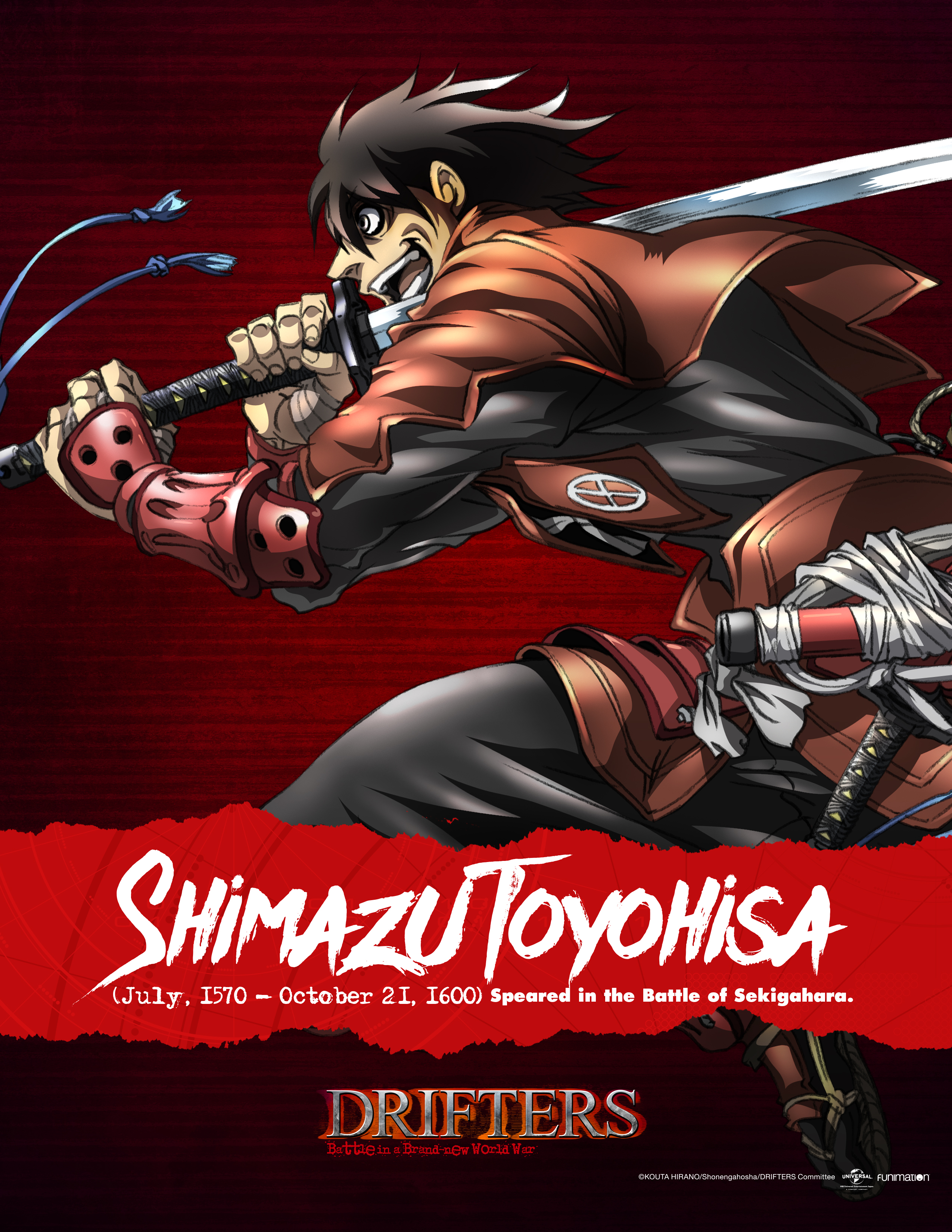 Death: Speared in the Battle of Sekigahara.

Bio: A brave warrior from the Sengoku period who resents cruelty and always repays his debts of gratitude. Wielding a long sword, Toyohisa readily rushes into battle without fear or regrets. 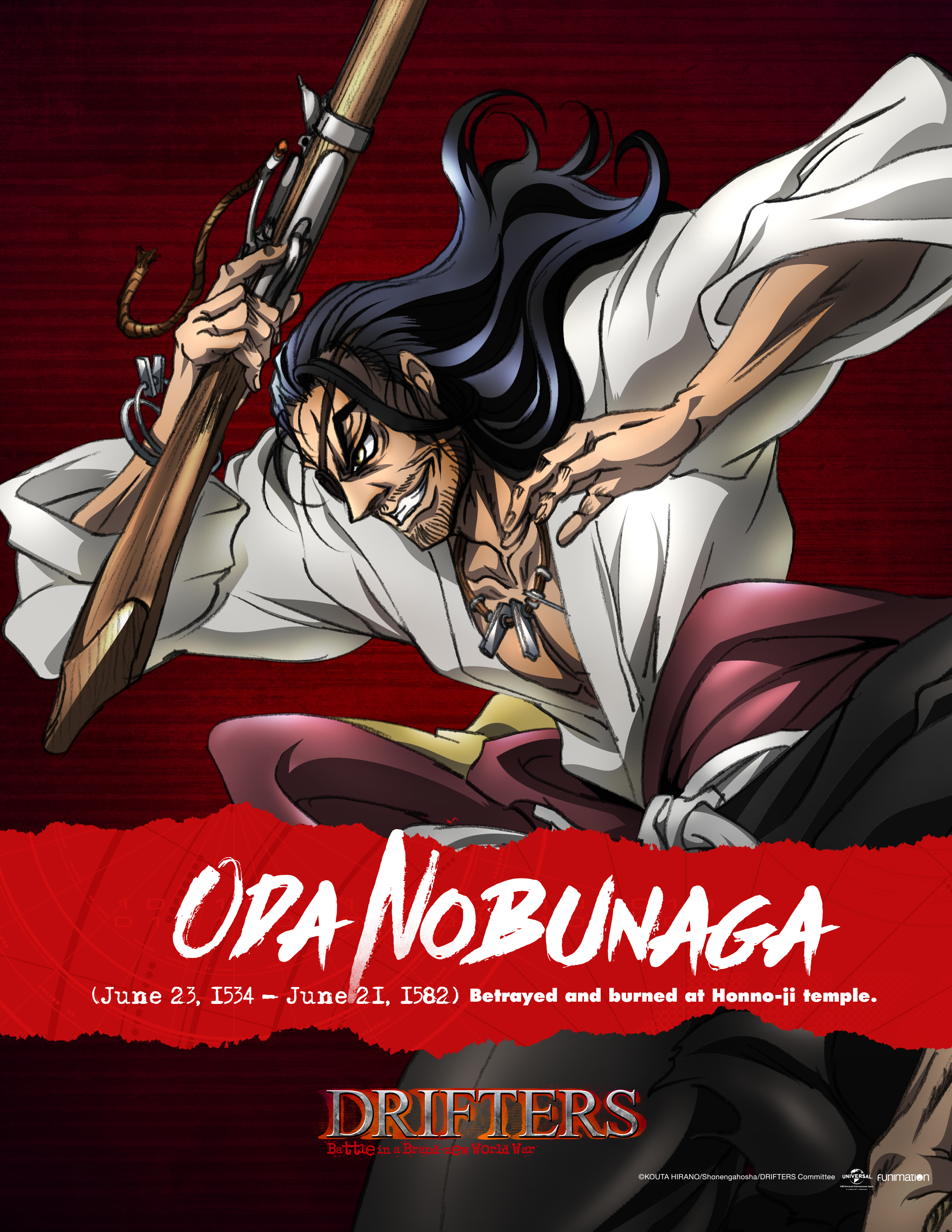 Bio: A highly ambitious and cunning military strategist who took over all of Japan in his time with his use of the Arquebus—an unconventional hook-rifle that surprised his enemies. 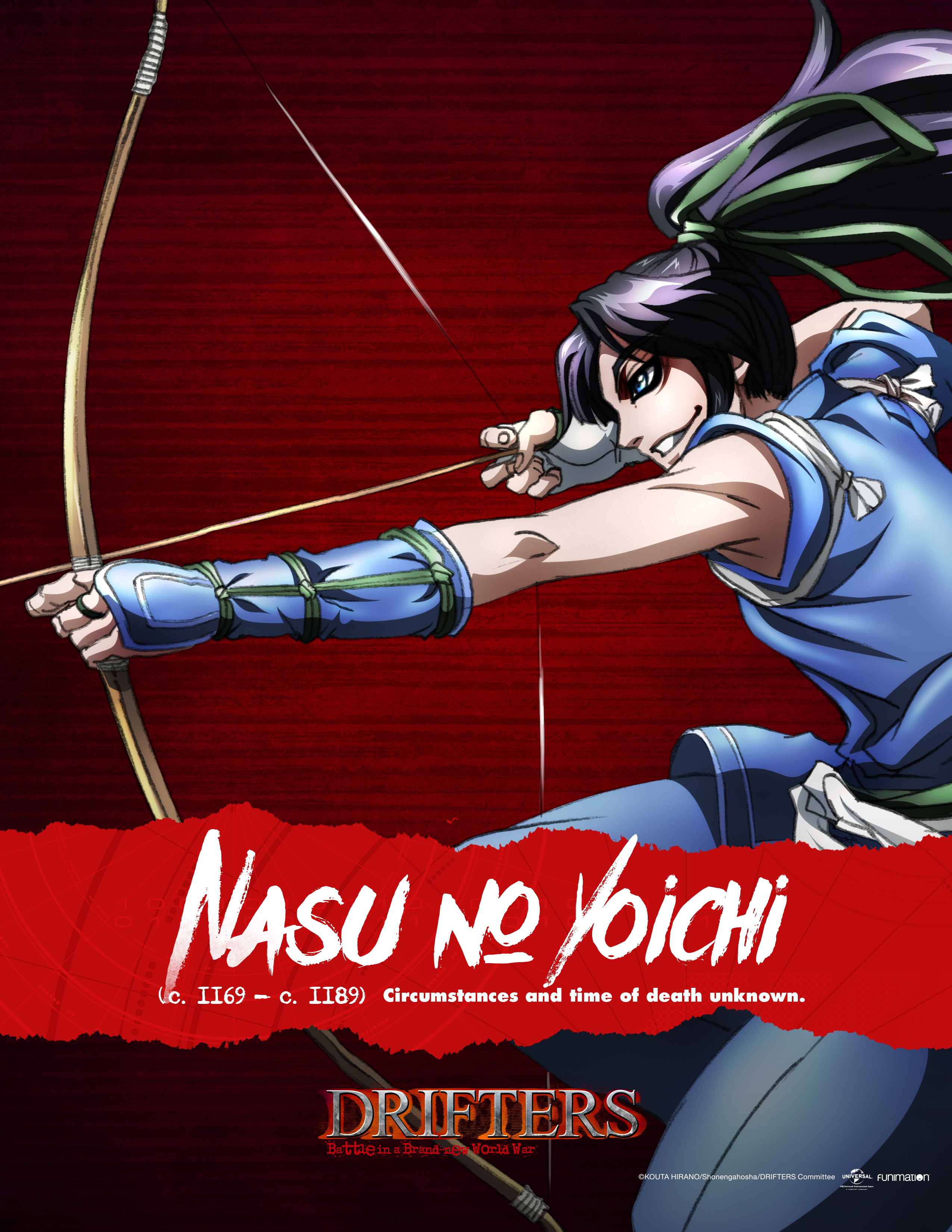 Death: Unknown—there is no account of when or how he died.

Bio: A powerful and exceptional archer, Yoichi fought in the famous Genpei War during the late Heian period of Japan. With him as their marksman, no one can flee the battlefield alive. 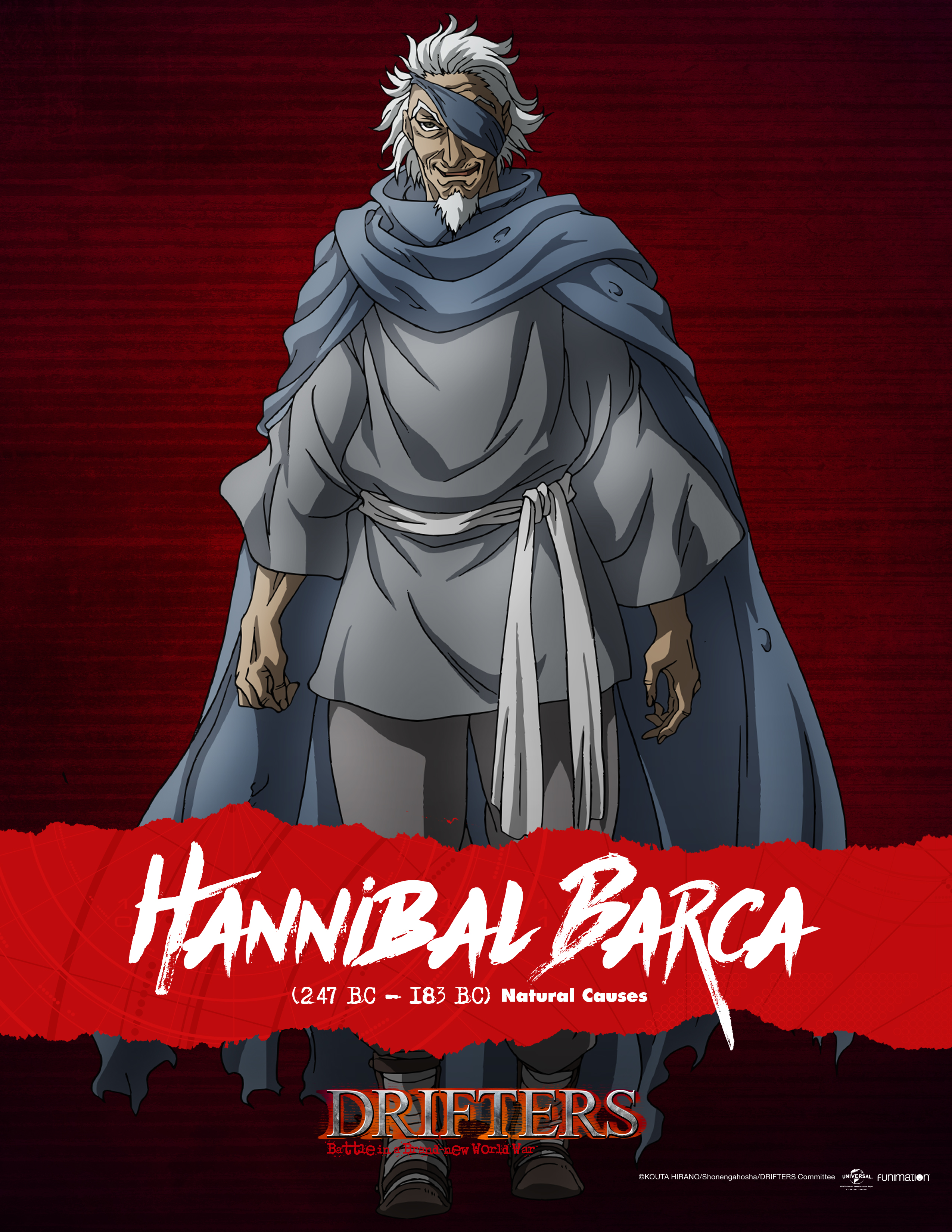 Bio: The genius tactician of Carthage, Hannibal is considered one of the greatest military commanders in history. Though he’s quite old, he still has the mind of a strategist and acts as Nobunaga’s military advisor. Also has plenty of spirit to bicker constantly with Scipio. 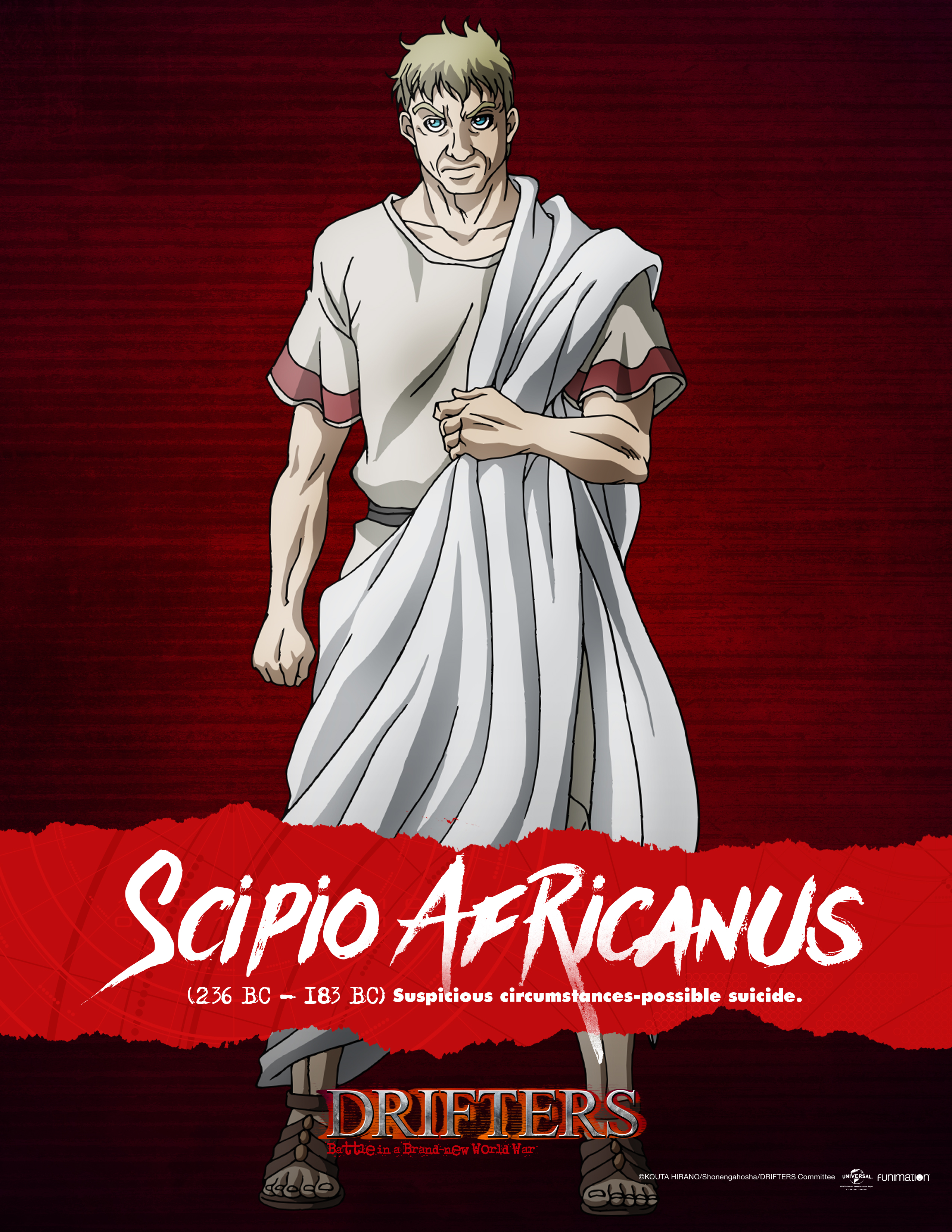 Bio: Known as one of the greatest generals and military strategists of all time, Scipio is remembered best for defeating Hannibal during the Second Punic War—and doesn’t let him forget it. Won’t typically admit it, but does hold respect for Hannibal. 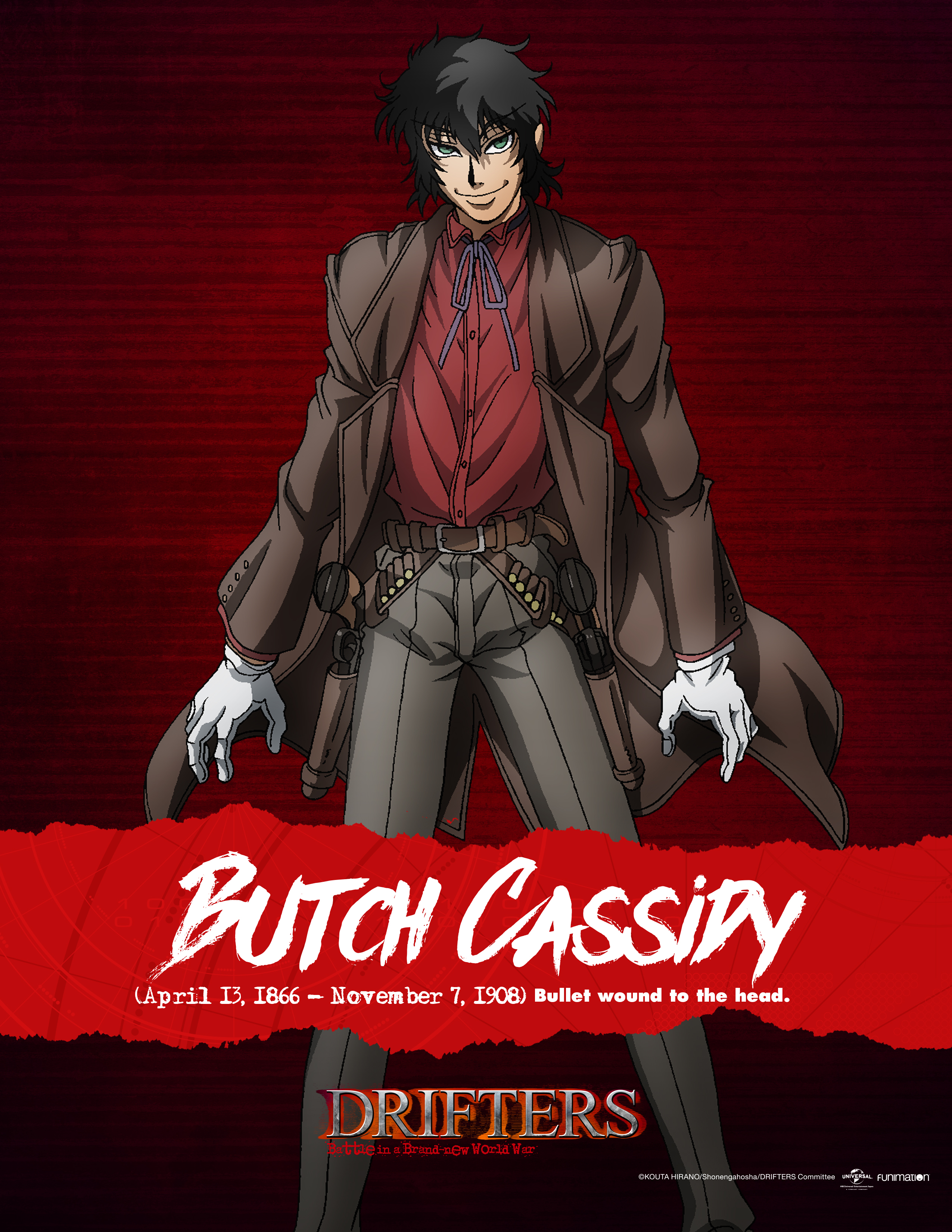 Death: Bullet wound to the head

Bio: Leader of the Wild Bunch Gang, Butch Cassidy was known as one of the greatest train robbers in all of history. Fast to draw and even faster to ride away, his wild nature makes him a rather eccentric fighter. 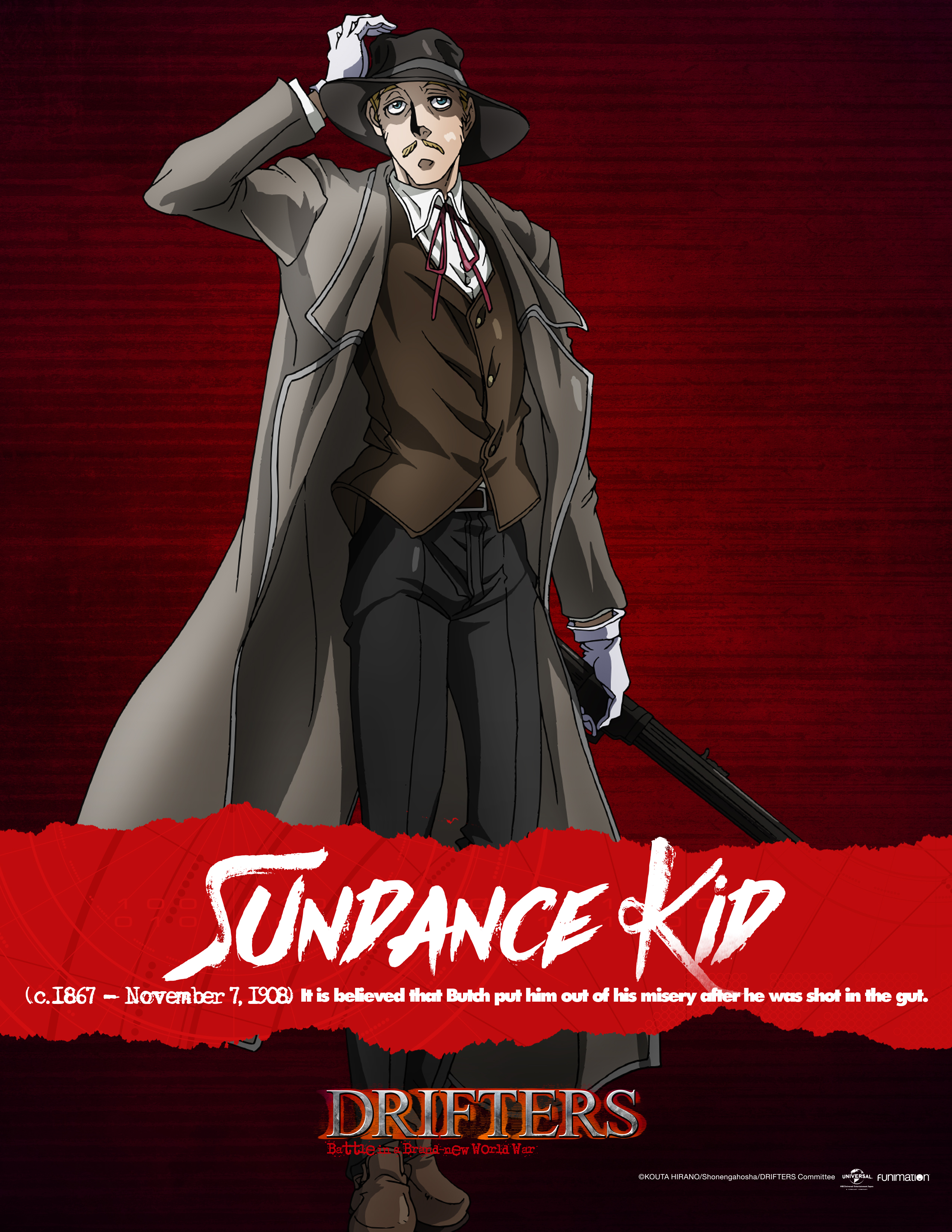 Death: It is believed that Butch put him out of his misery after he was shot in the gut.

Bio: Butch Cassidy’s right hand man and member of the Wild Bunch Gang, The Sundance Kid is certainly a calmer contrast to Butch’s wild personality. Then again, he does most of his talking with his massive Gatling gun. 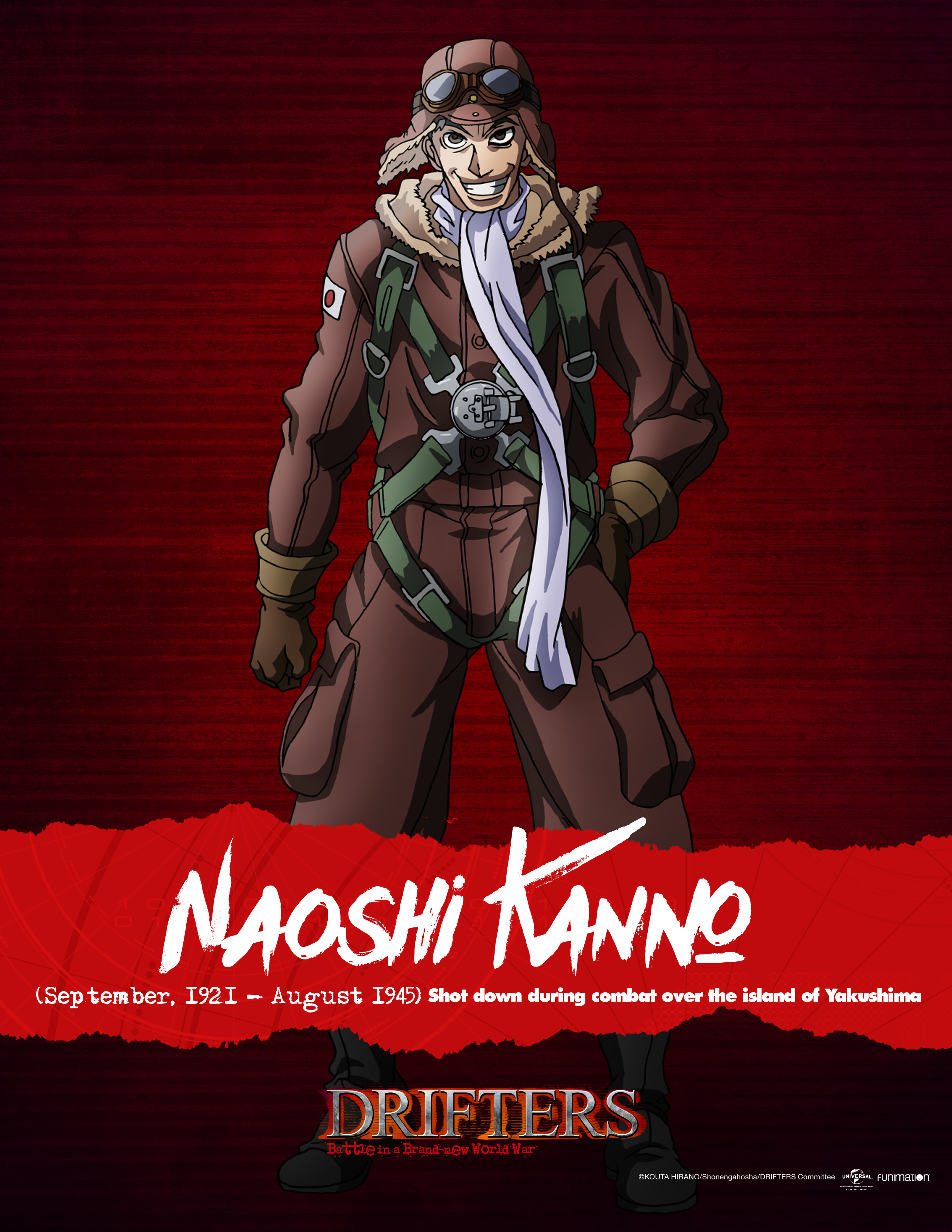 Death: Shot down during combat over the island of Yakushima

Bio:  From pilot to sky god, Naoshi Kanno is a fearless wild cannon. This fighter pilot is ready to fly into the fight without any regard for his life — so long as he takes down his enemy. But after crashing his plane, he falls into a tribe of talking dogs who declare him a god and he gladly accepts his new role. 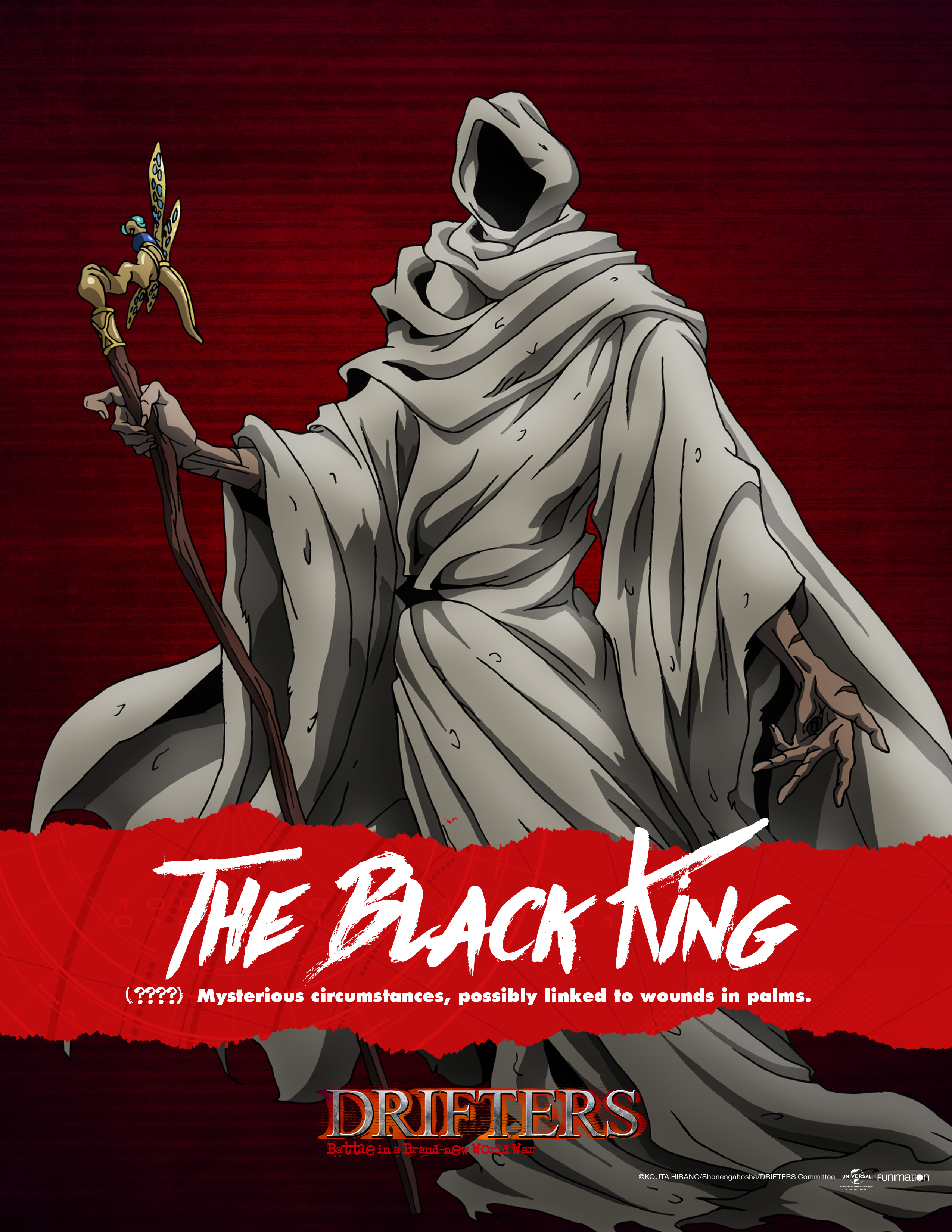 Bio: Cloaked in darkness, the Black King is a mystery to this world unlike any other. Once a savior in his world, he was rejected by the people and died harboring great resentment that has carried over to this world. Wielding powers to heal and provide unlimited supplies for his army, the Black King has everything he needs to hold power in this war. But what secrets does he hold? 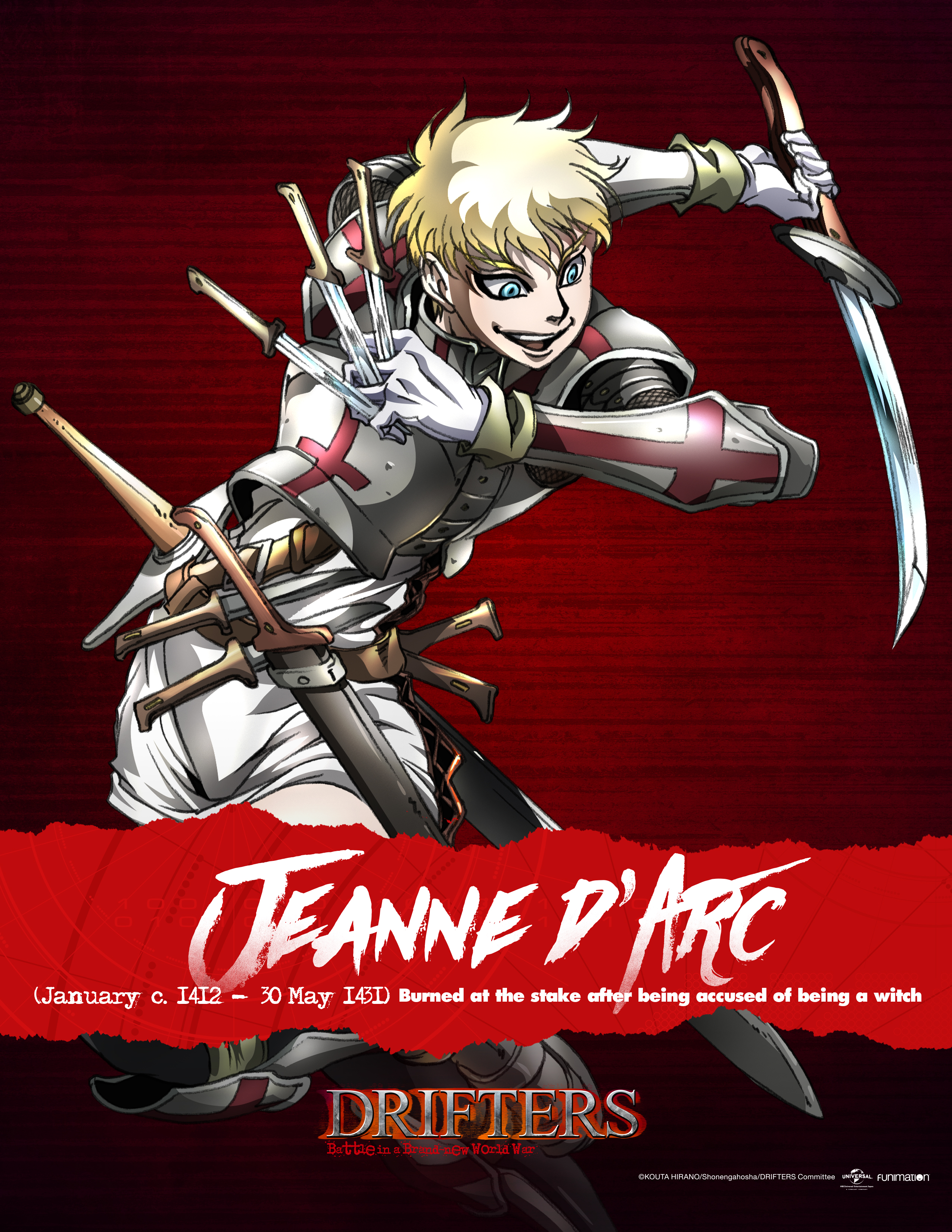 Death:  Burned at the stake after being declared a witch

Bio: Once a warrior of her god, now a warrior of vengeance, Jeanne D’Arc is driven by reckless abandon. With questionable sanity, she is ready to unleash her deadly flames and watch the world burn. 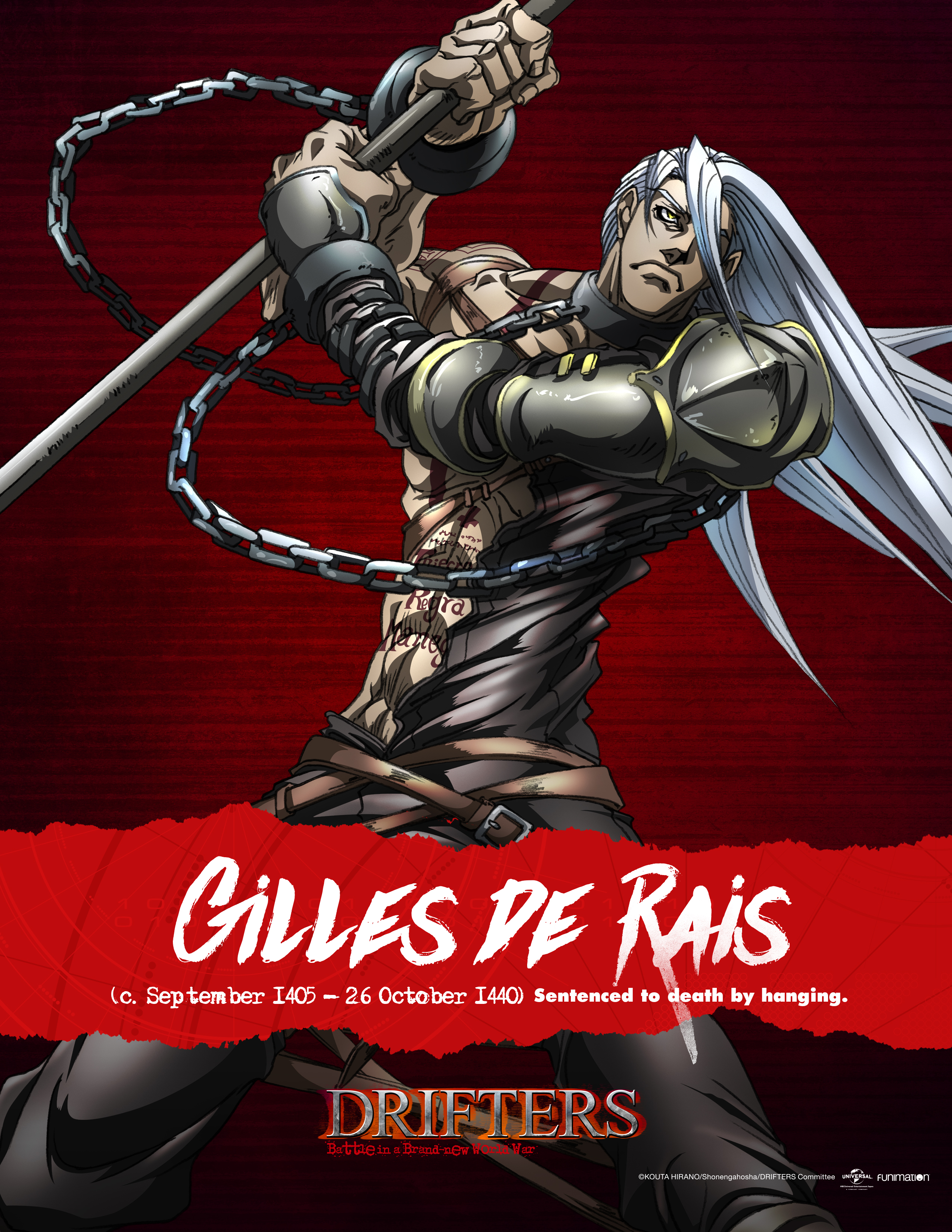 Death: Sentenced to death by hanging

Bio: A devoted soldier to Jeanne D’Arc, Gilles de Rais was sentenced to death accused of murdering and assaulting children. Though some believed it was a cover up and he was really punished for attempting to carry on Jeanne’s work. Reunited with Jeanne, he continues to fight by her side and wants only to protect her. 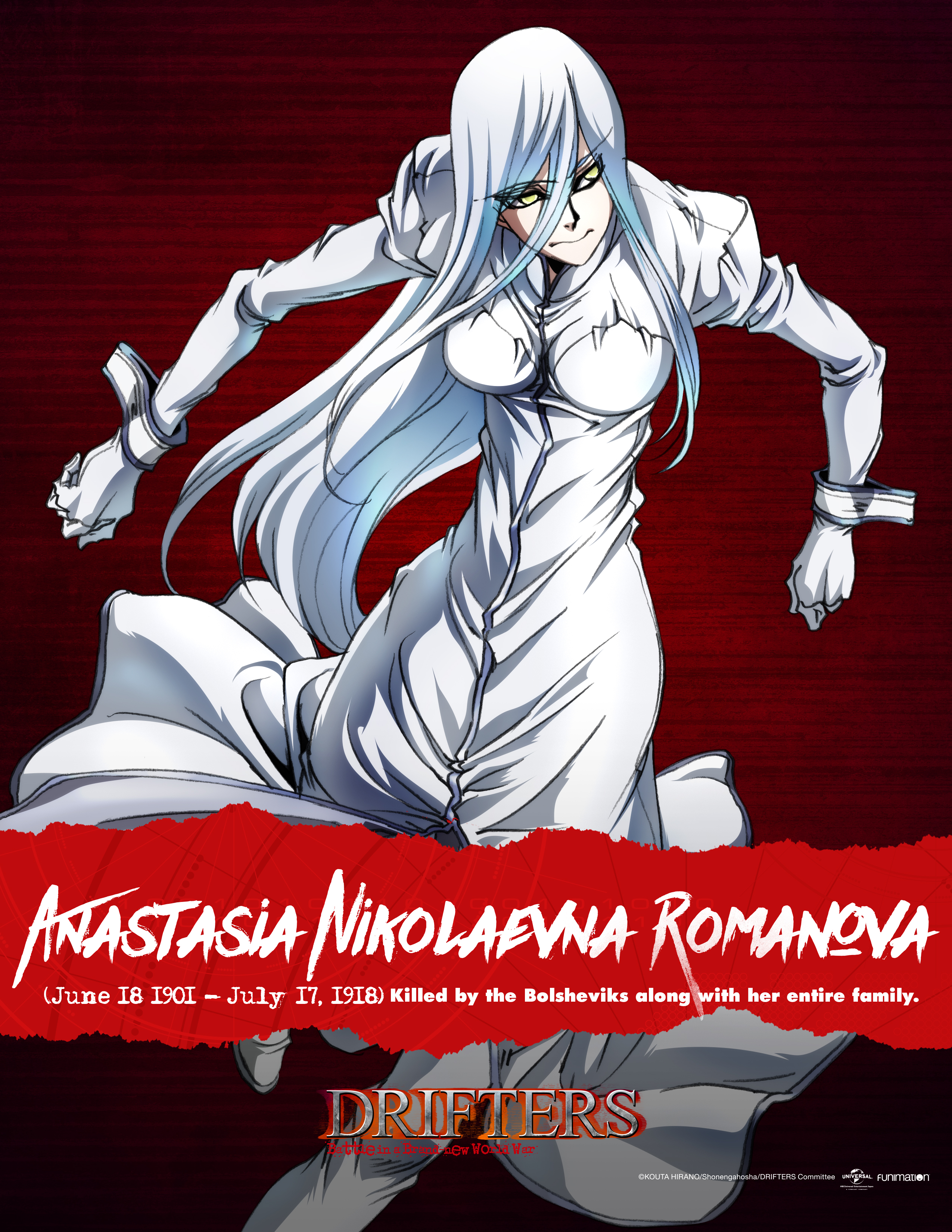 Death: Killed by the Bolsheviks along with her entire family.

Bio: During the Russian revolution, the Bolsheviks’ kidnapped and slaughtered Anastasia and her family. Last to die, she witnessed their gruesome murder, leaving her a cold and empty woman who now sides with the Ends. Gifted with the powers of ice and snow, she does the bidding of the Black King but remains impassive. Only with Jeanne D’Arc does she show any signs of emotion. 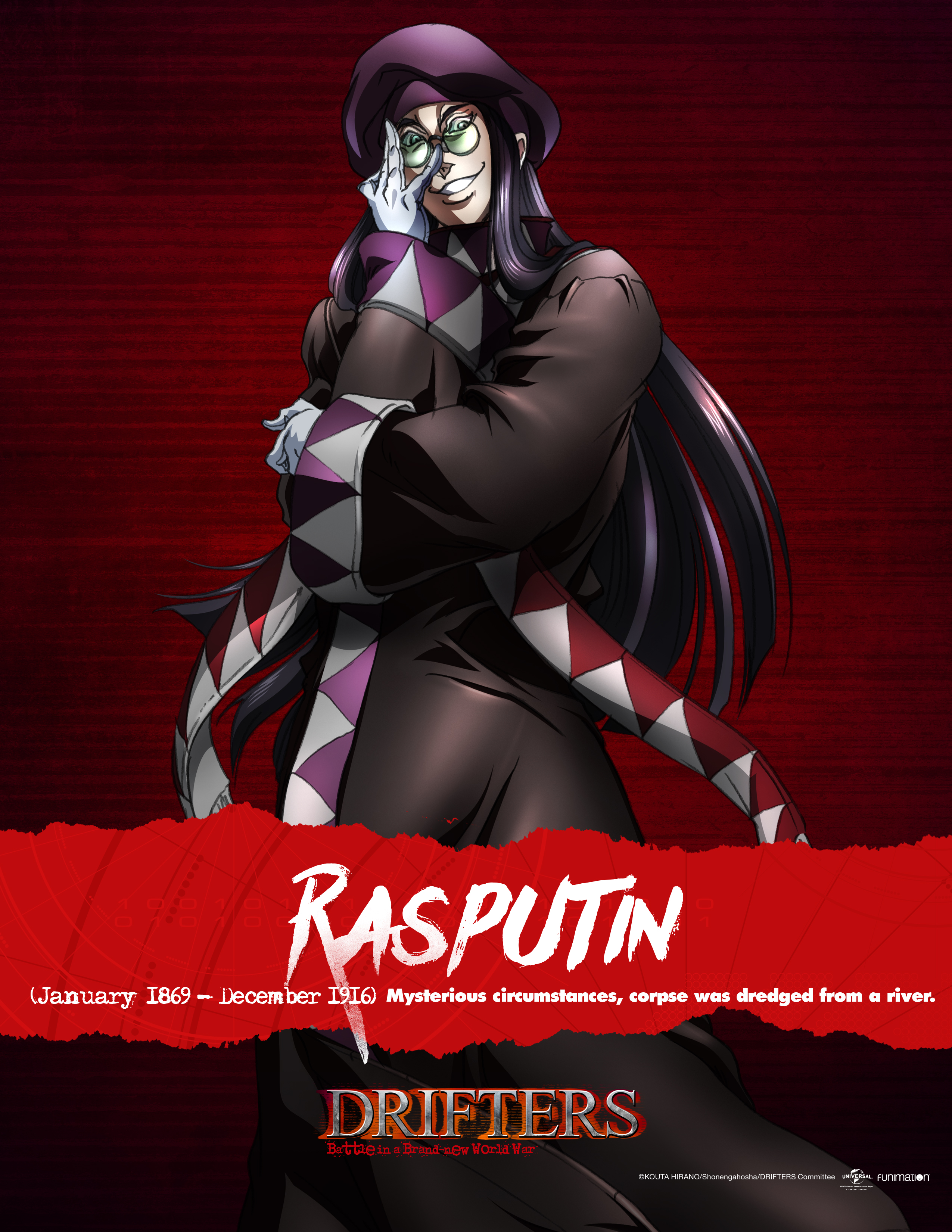 Death: Mysterious circumstances, most likely assassinated. Corpse was dredged from a river.

Bio: Mystic, manipulator, and known playboy, Rasputin has a knack for getting what he wants and doing whatever it takes. Though he is remembered best for his mystical gifts, now he works as the Black King’s spymaster using his skills to get information on the Drifters and other opposing forces. He typically travels alongside other Russian native, Anastasia. 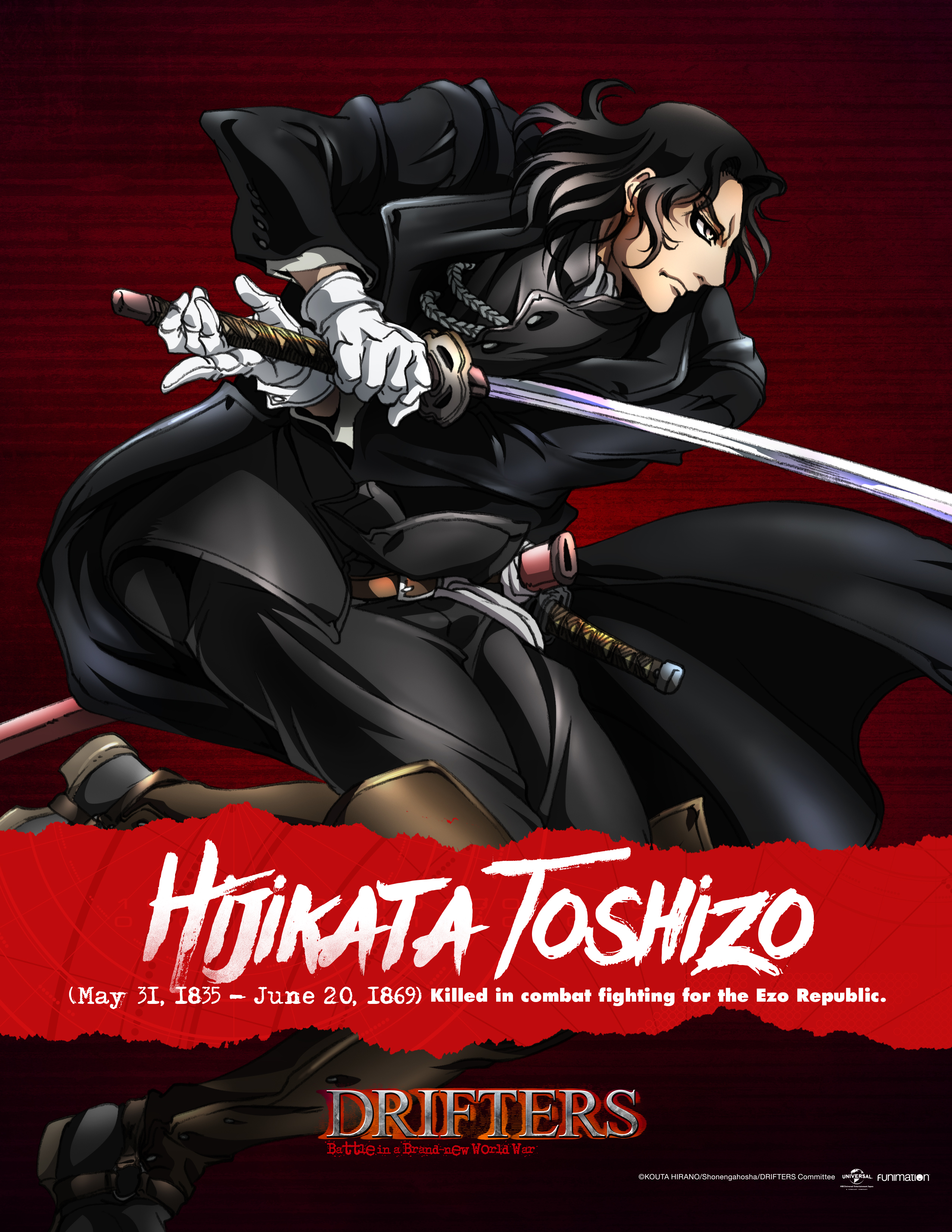 Death: Killed in combat fighting for the Ezo Republic.

Bio: A former vice-commander of the Shinsengumi army, Hijikata is a terrifying man. As an Ends, he has the ability to summon the spirits of his fallen comrades to take out anyone who stands in his or the Black King’s way. Even without his newfound powers, he is a deadly force when he wields his sword. Though he does not know Shimazu Toyohisa, he harbors resentment and vengeance towards the Shimazu clan and will destroy all who bear the name. 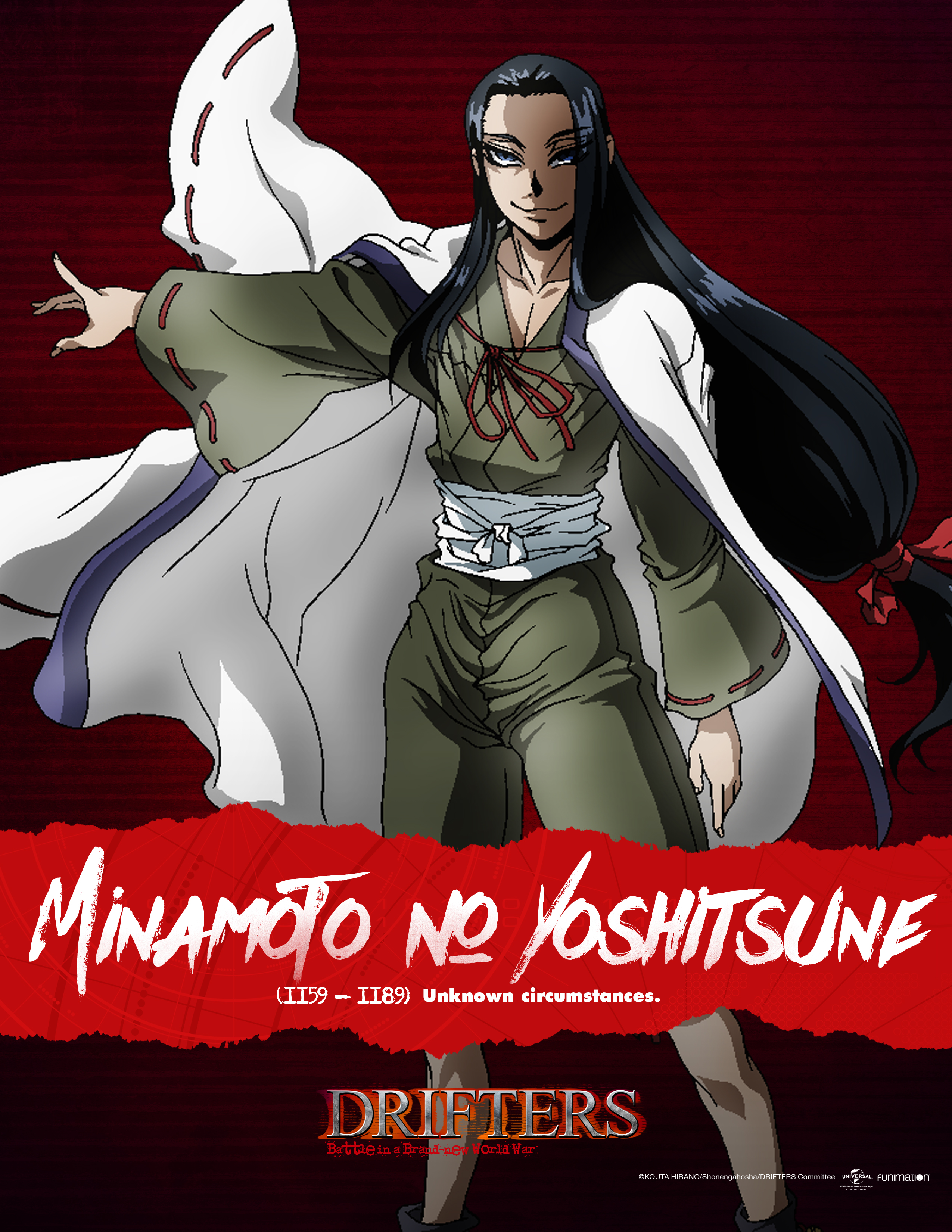 Bio: A warrior of the Genpei War, Yoshitsune is a familiar figure from Nasu no Yoichi’s life. Powerful and deadly, he rose to the rank of general and was then appointed Governor of Iyo. Not much else is known about him or the role he plays with the Ends. 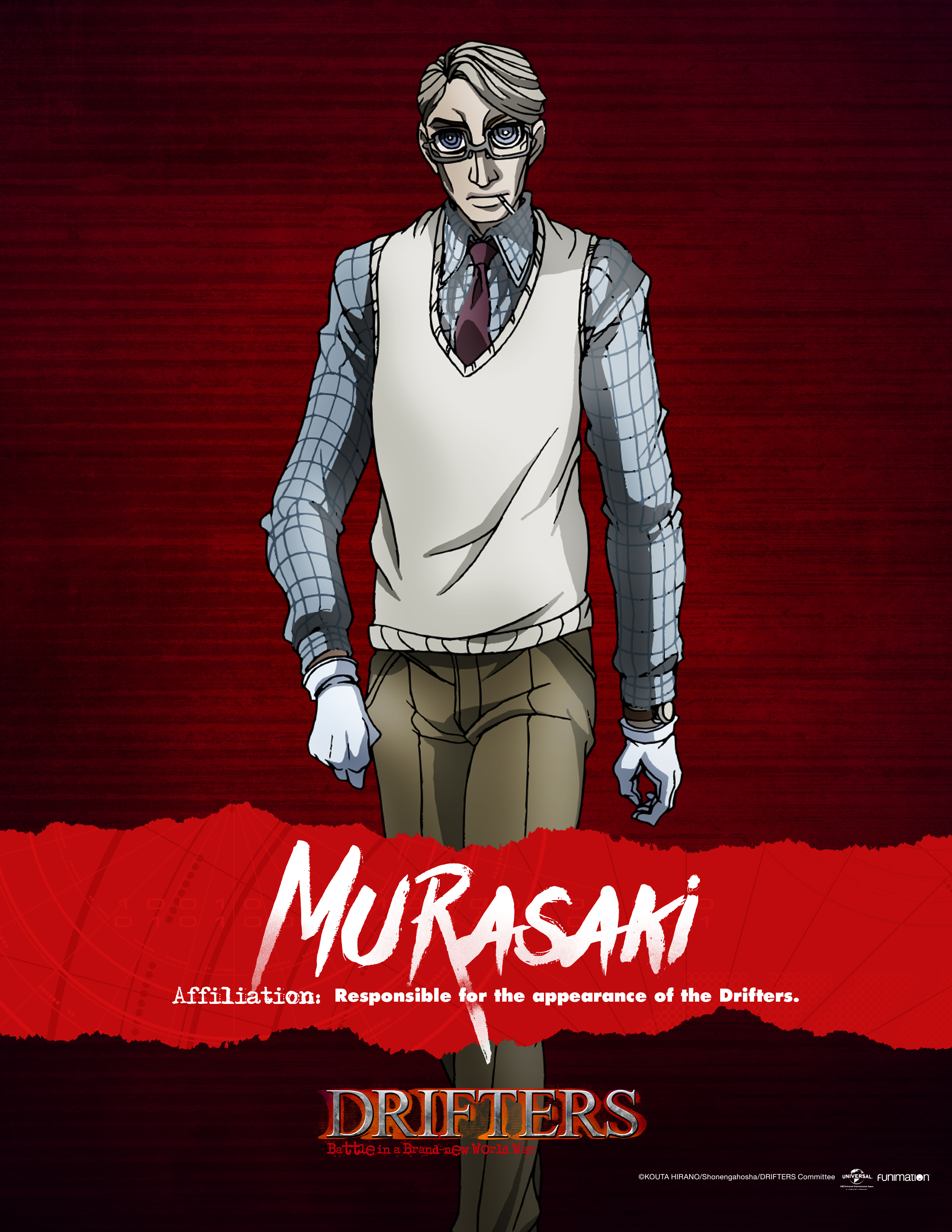 Affiliation: Responsible for the appearance of the Drifters.

Bio: Not much is known about Murasaki. He is often seen greeting incoming Drifters while reading his newspaper—which keeps him up to date on what is happening in the world and what the Drifters are doing. Many refer to him as the ‘bespectacled man in the corridor’. 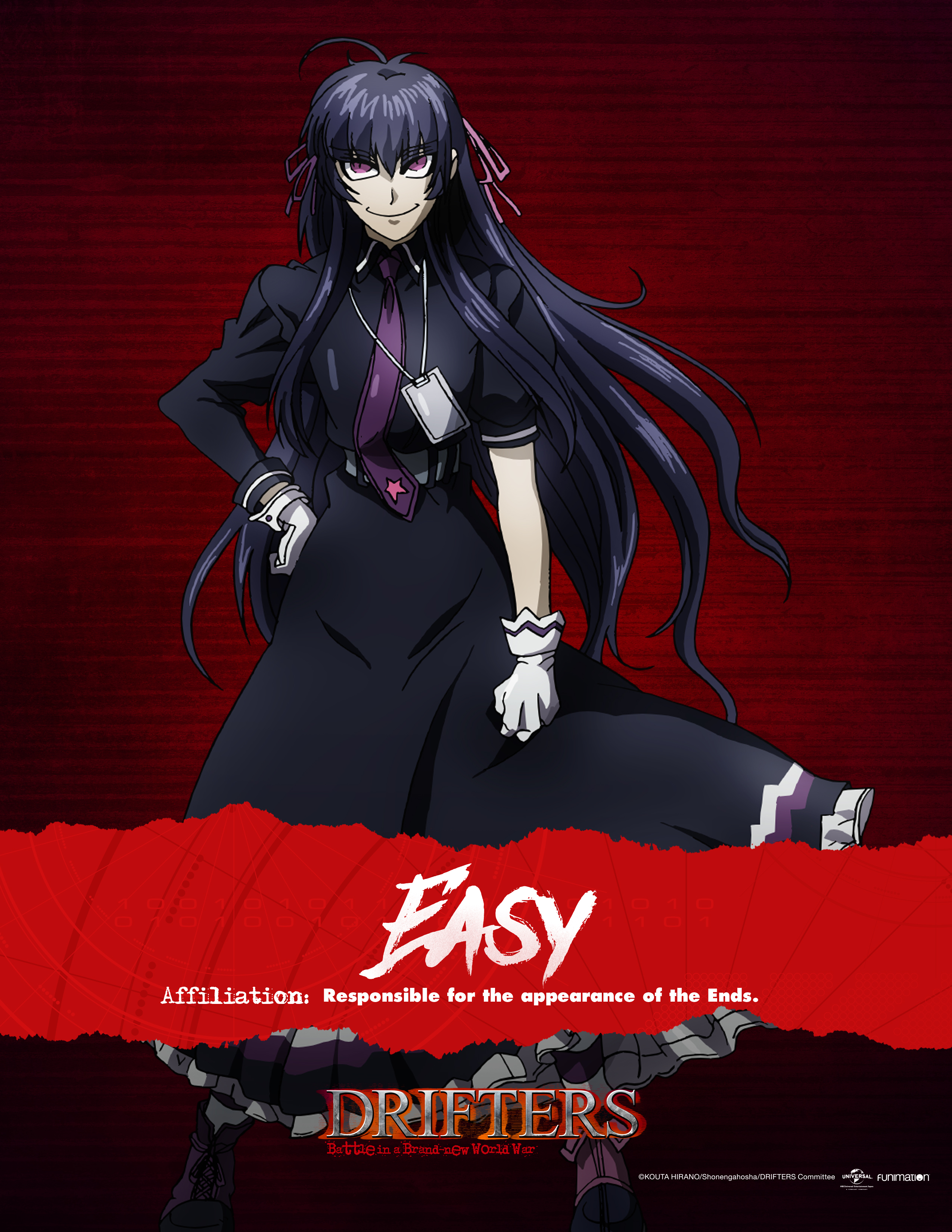 Affiliation: Responsible for the appearance of the Ends.

Bio: The woman opposing Murasaki who chooses the Ends. She receives her information through what appears to be an online blog. Her real name is unknown but holds the acronym EA for “Eternal Ambassador”. Her reasons for supporting the Ends and the destruction of the world are currently a mystery. 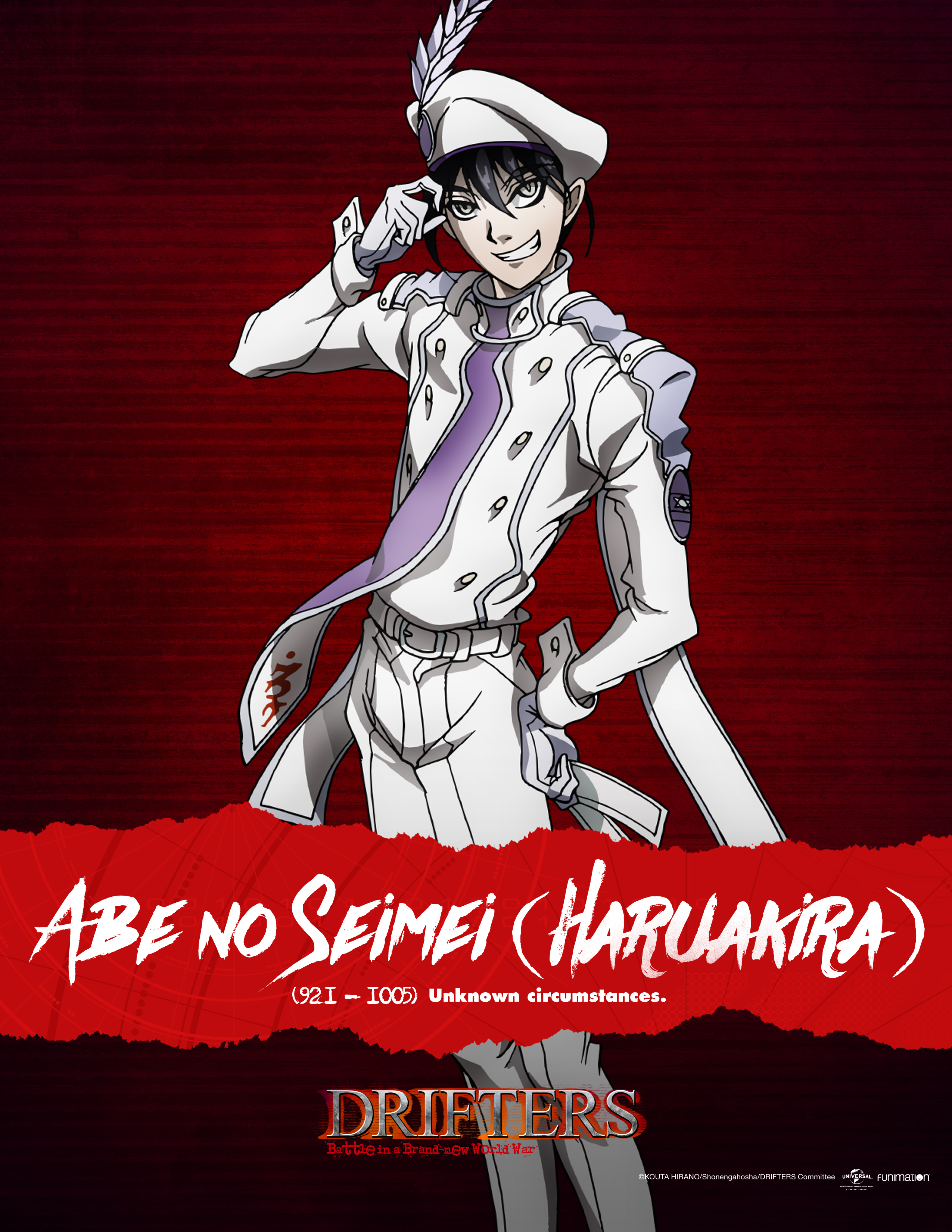 Bio: Also known as Abe no Seimei. He leads The Octobrists as head magician and works to bring the Drifters together. In his previous life, he was a onmyōji—someone who practiced an ancient art of occultism and science as well as divination. Appears to know more about Murasaki than anyone else, could possibly be working closely with him. 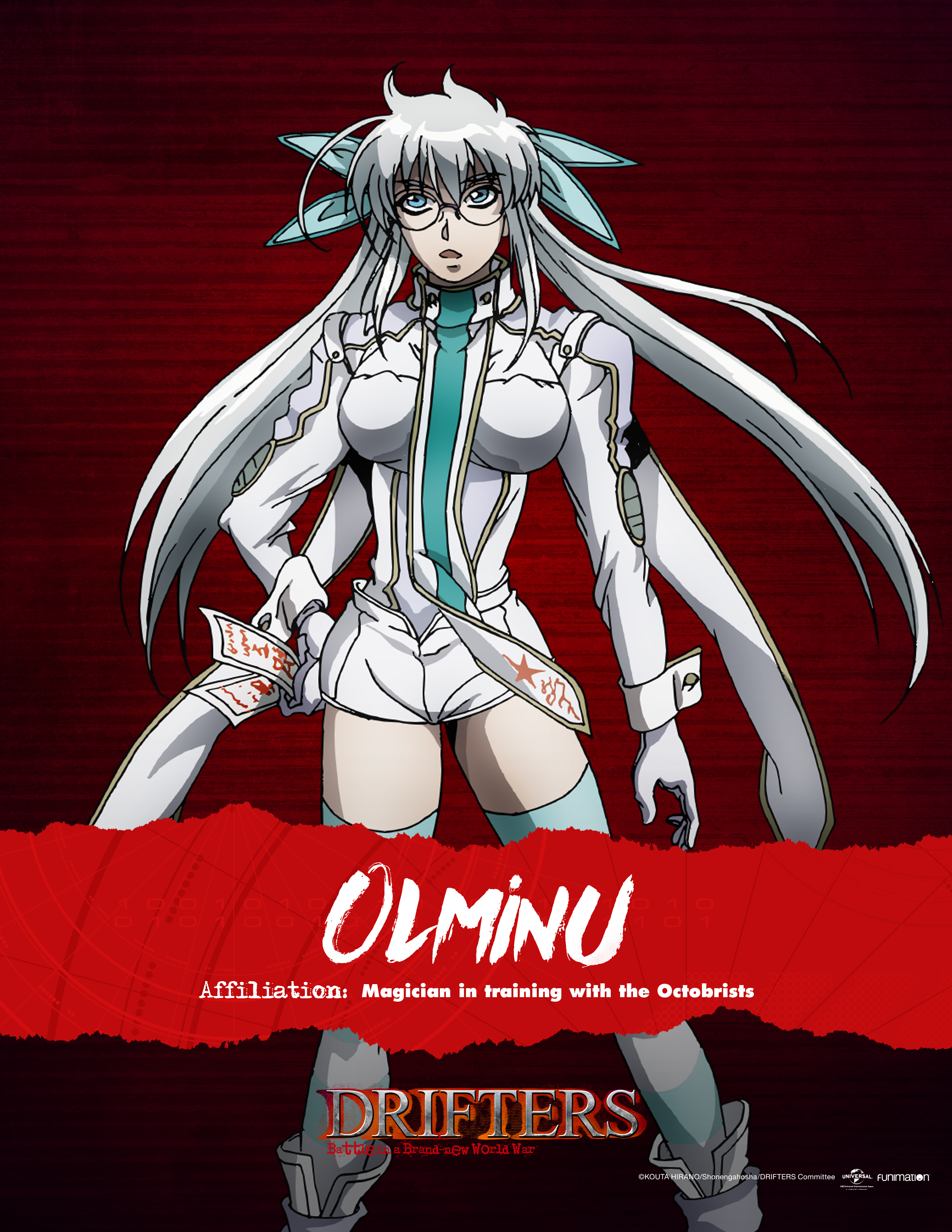 Bio: Training under the tutelage of Abe no Haruakira, Olminu is tasked with working alongside Toyohisa, Nobunaga, and Yoichi—much to her dismay. Her magical skills are still developing, but Abe no Haruakira sees a lot of potential in her. She is also known under the codename “Shem.” 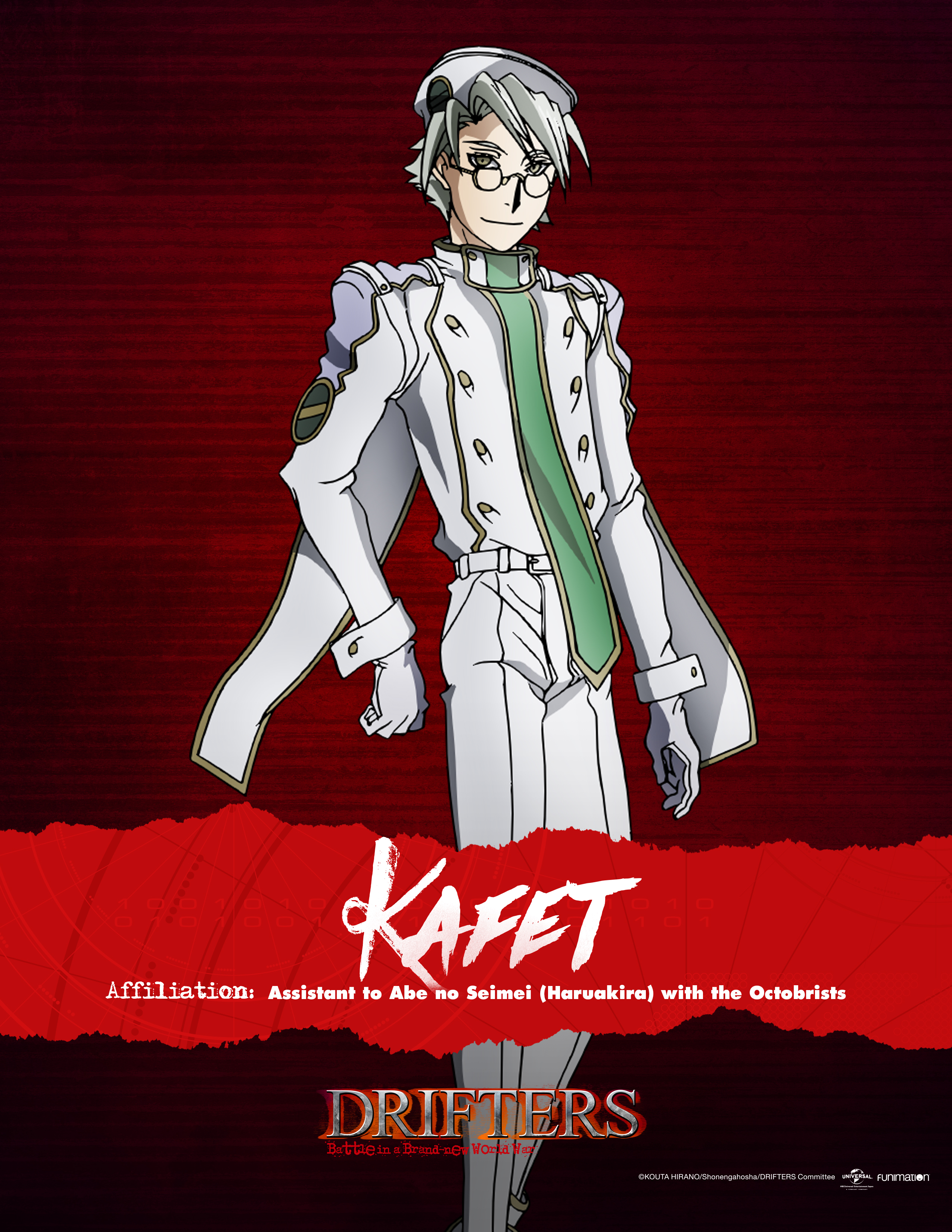 Bio: Another magician in training working with the Octobrists. He works closely with Abe no Haruakira as a personal assistant and goes out on missions to collect Drifters as well as information. His codename is “Ham.”

Catch new episodes of Drifters, every Sunday at 10:00pm ET on FunimationNow.